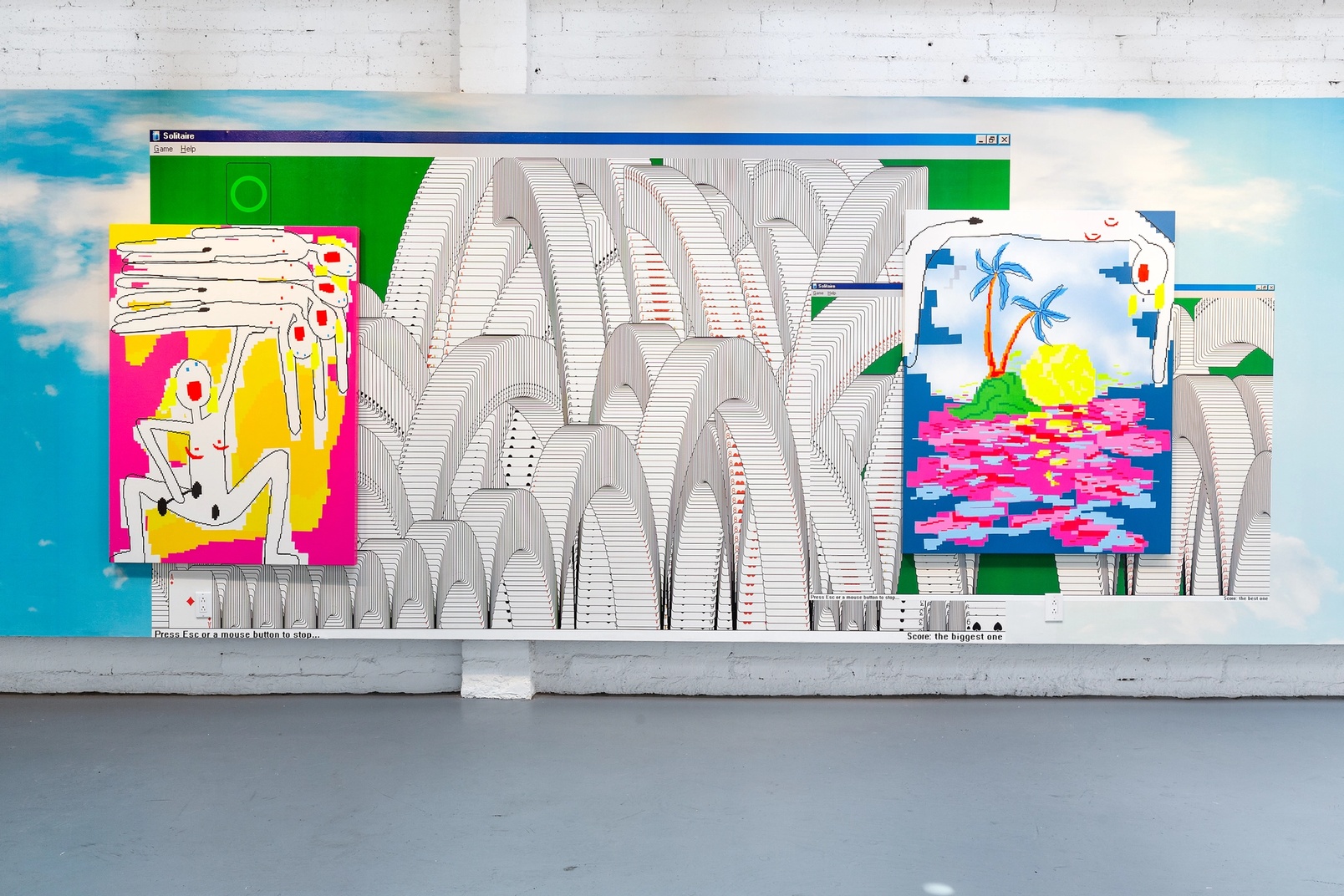 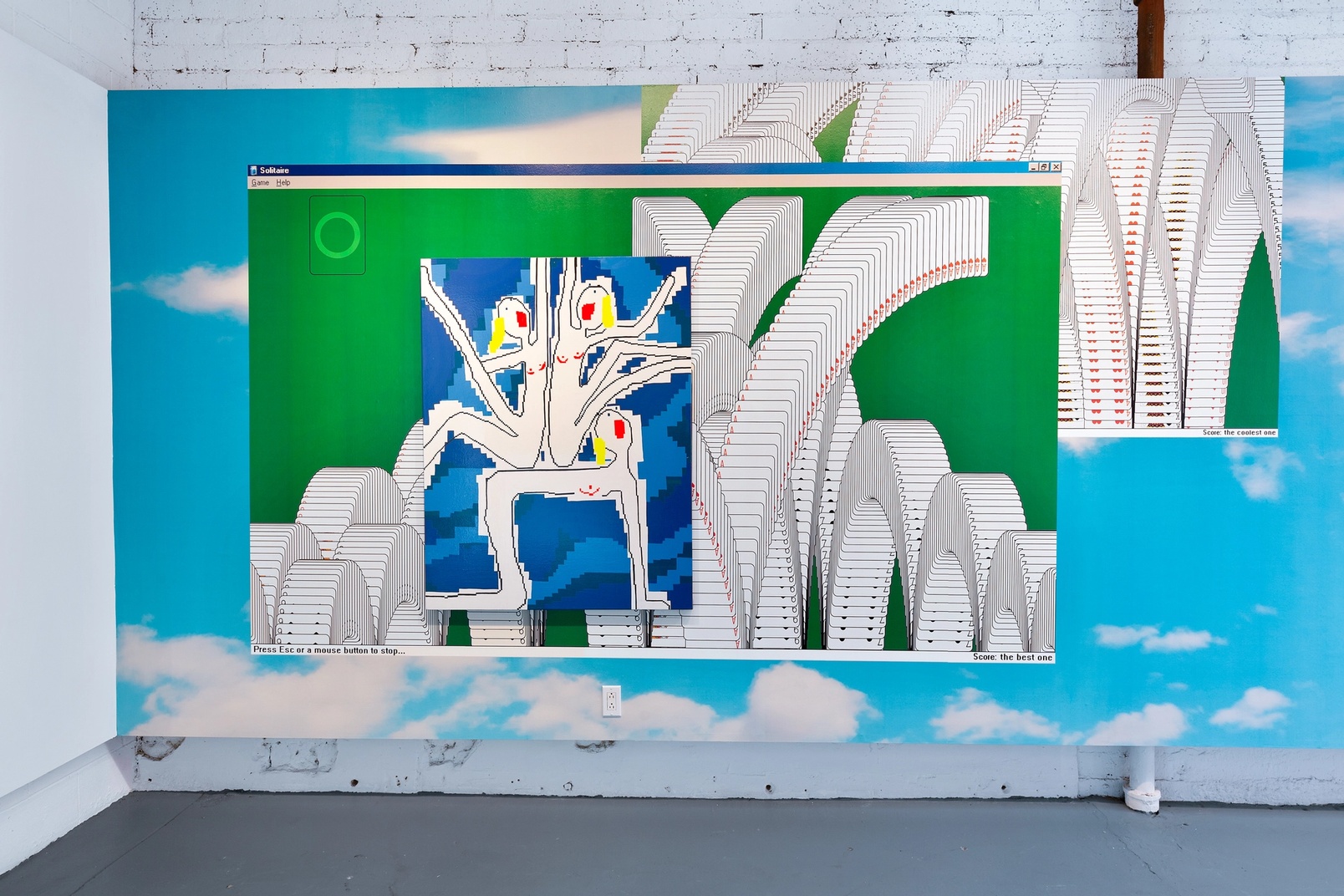 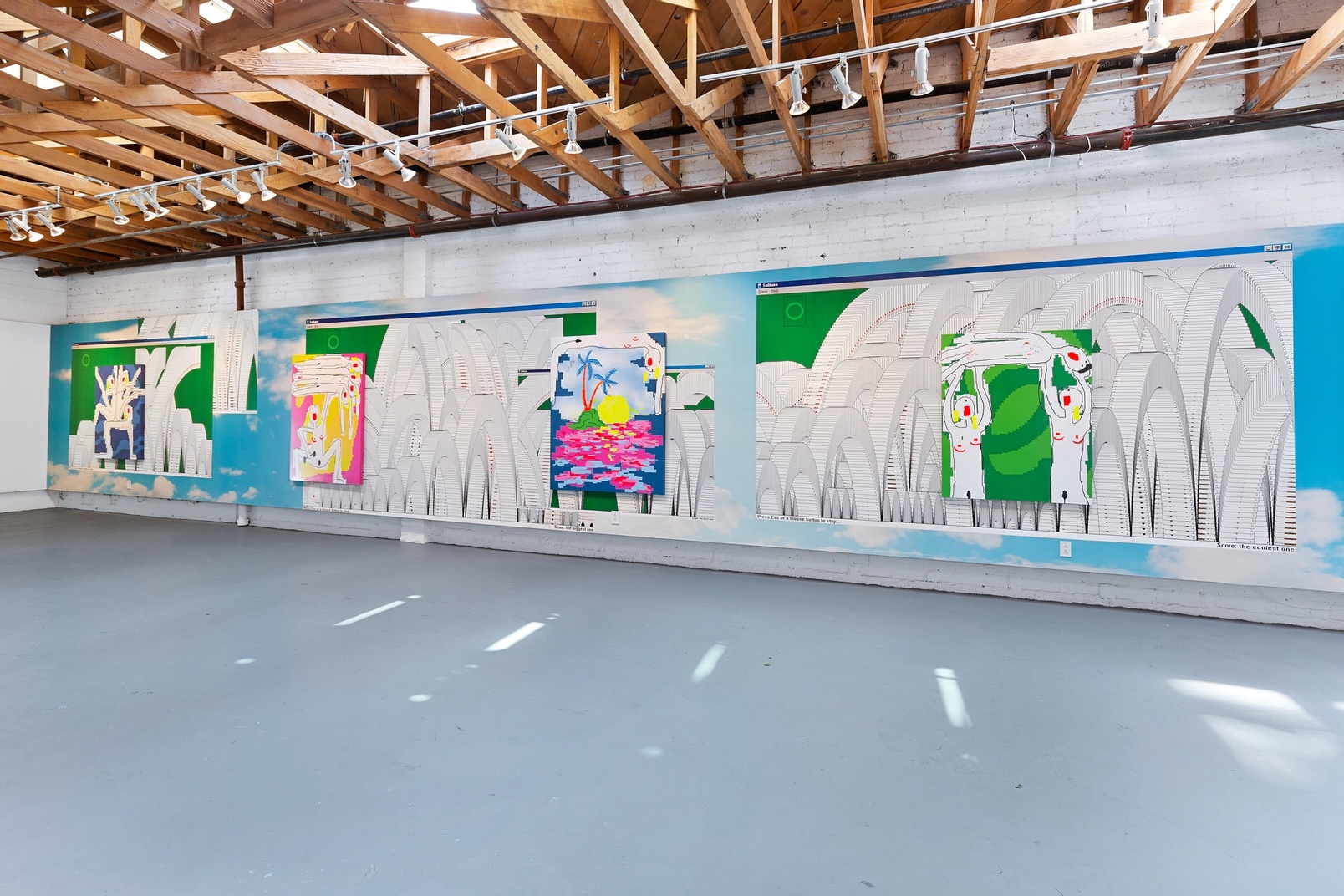 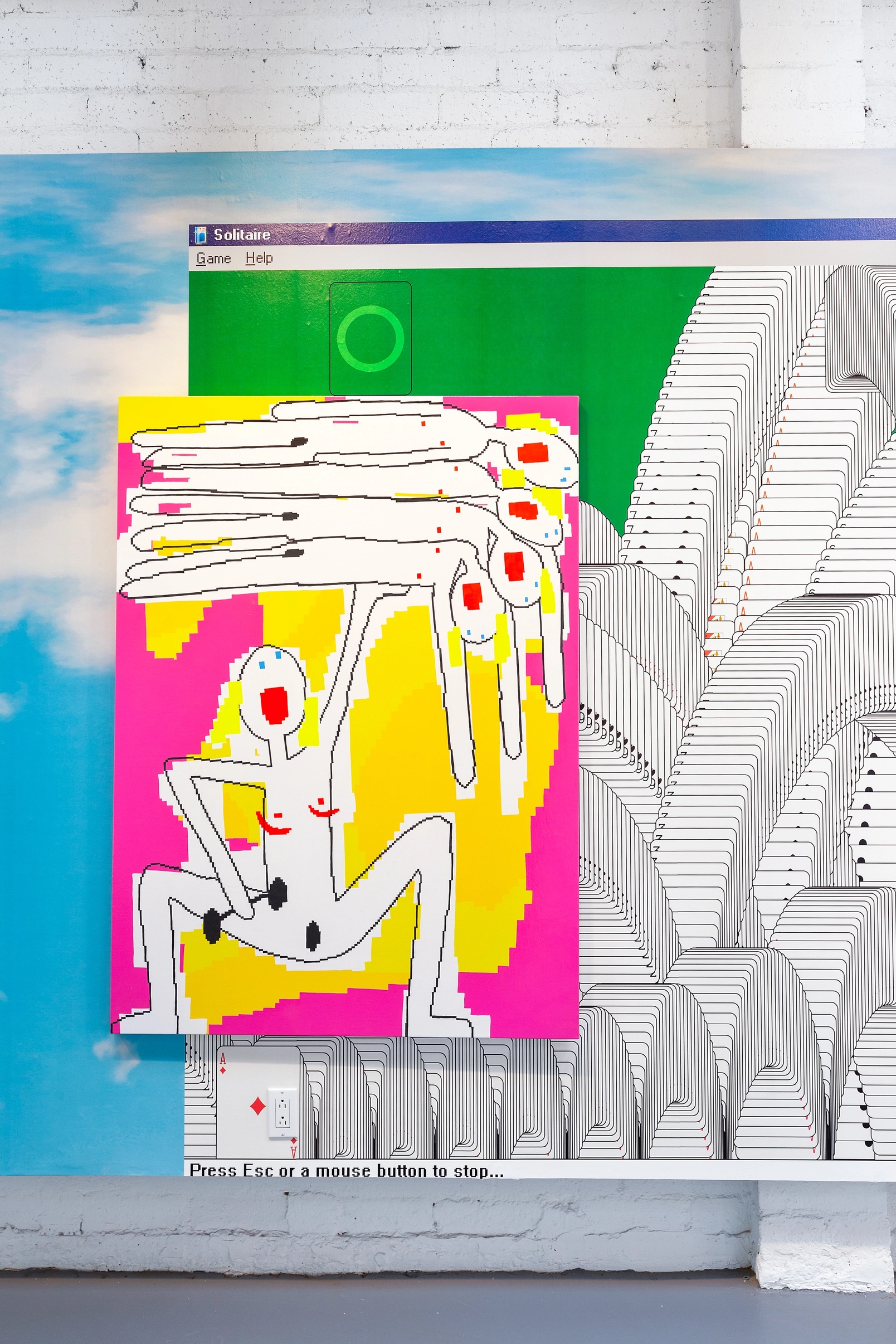 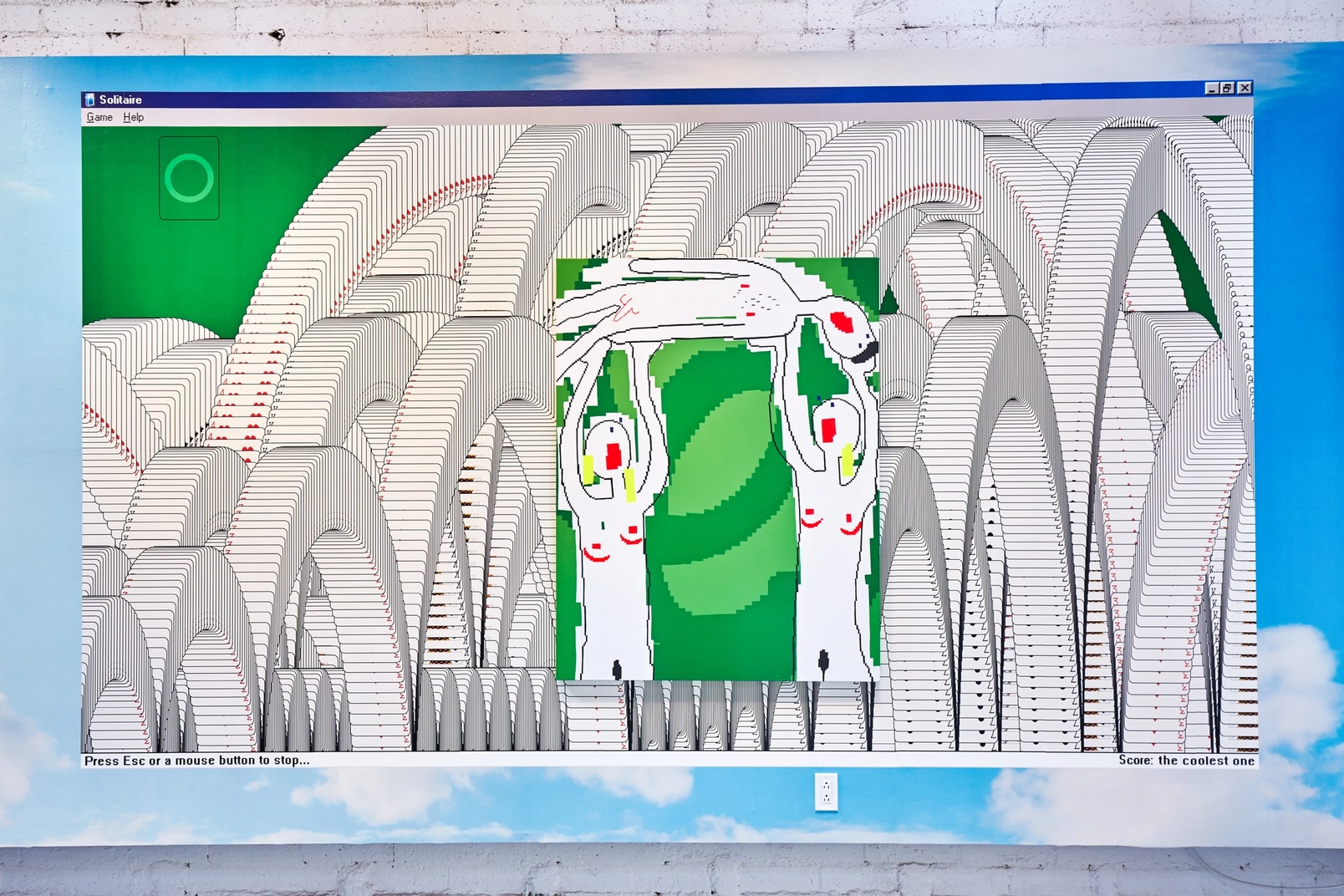 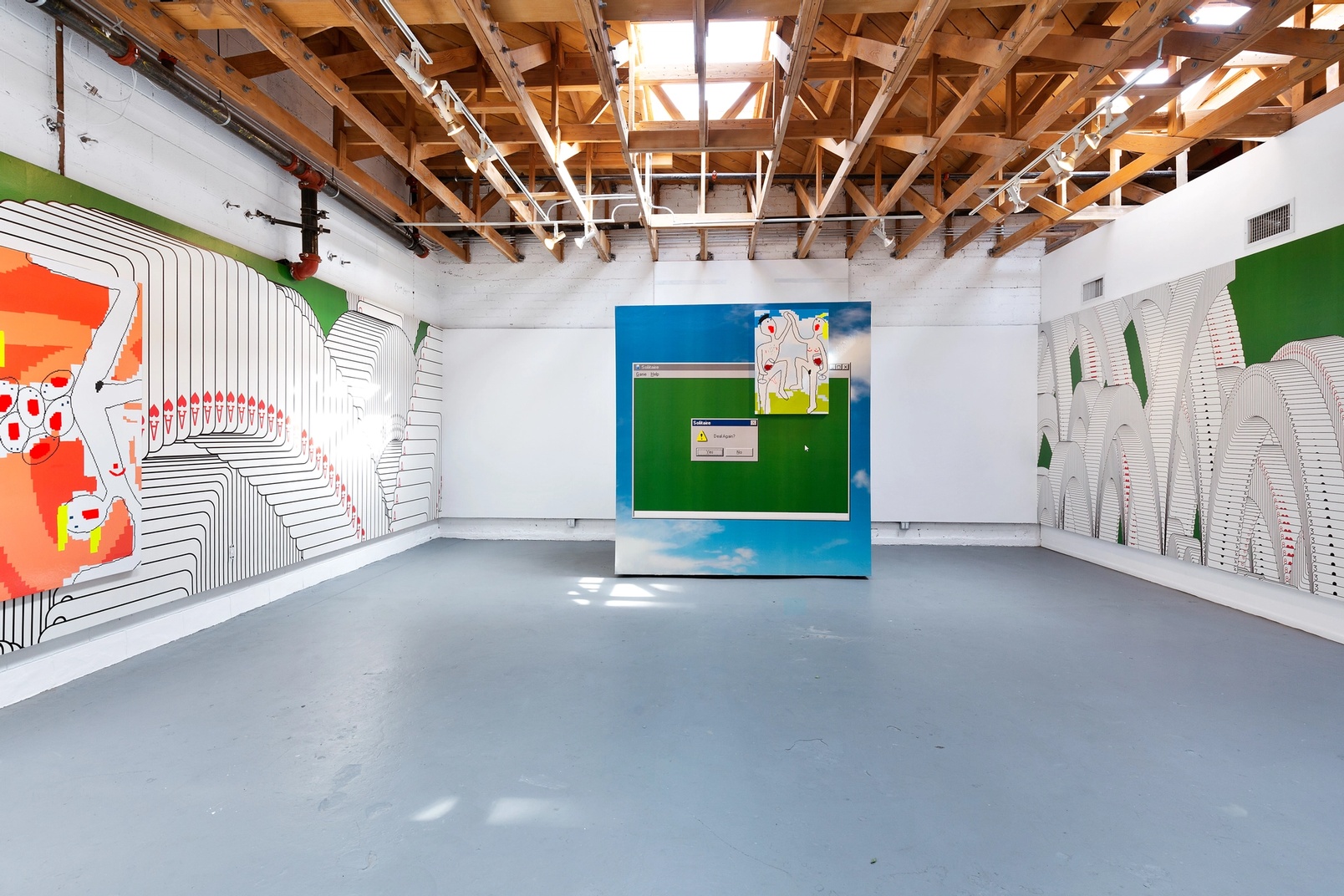 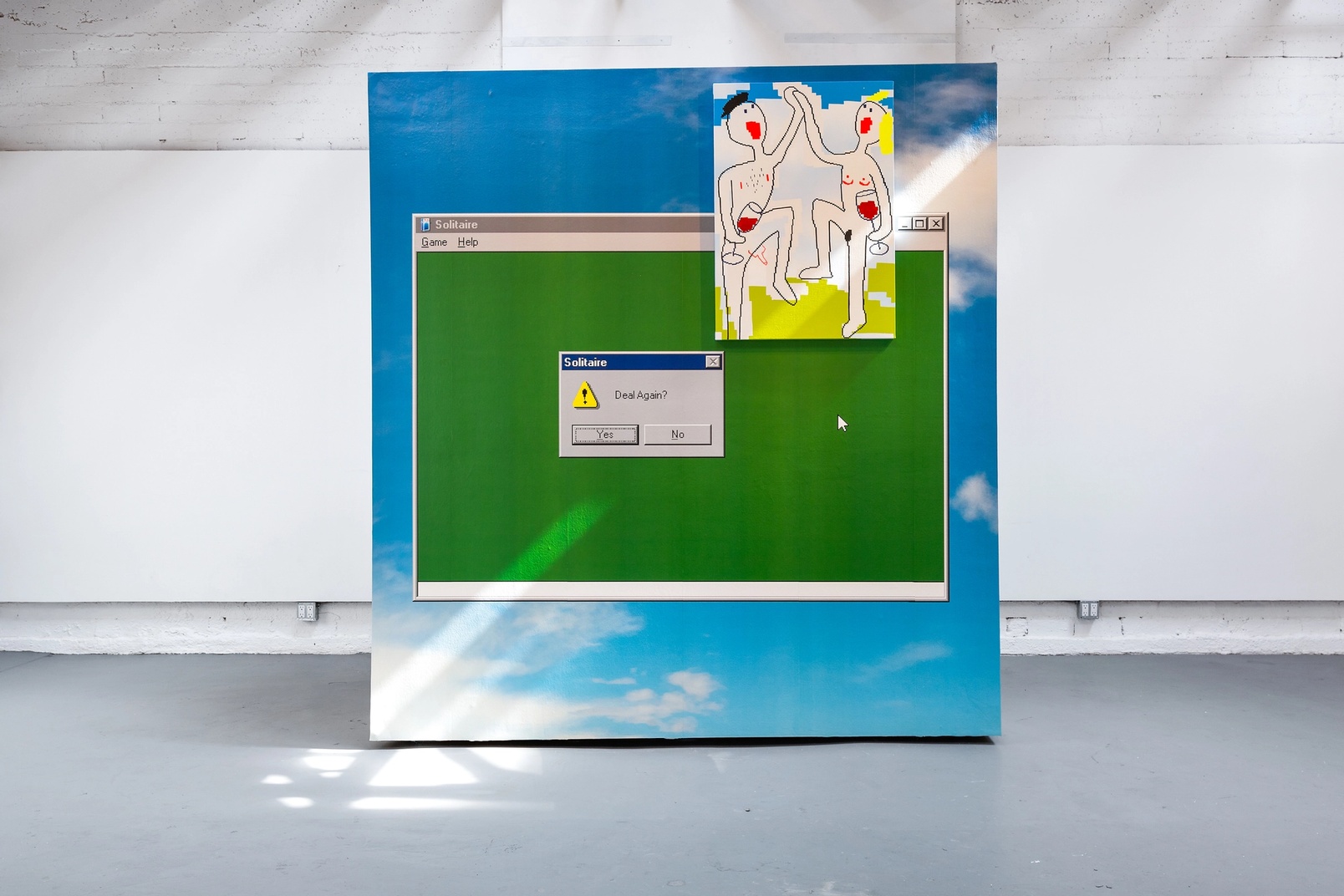 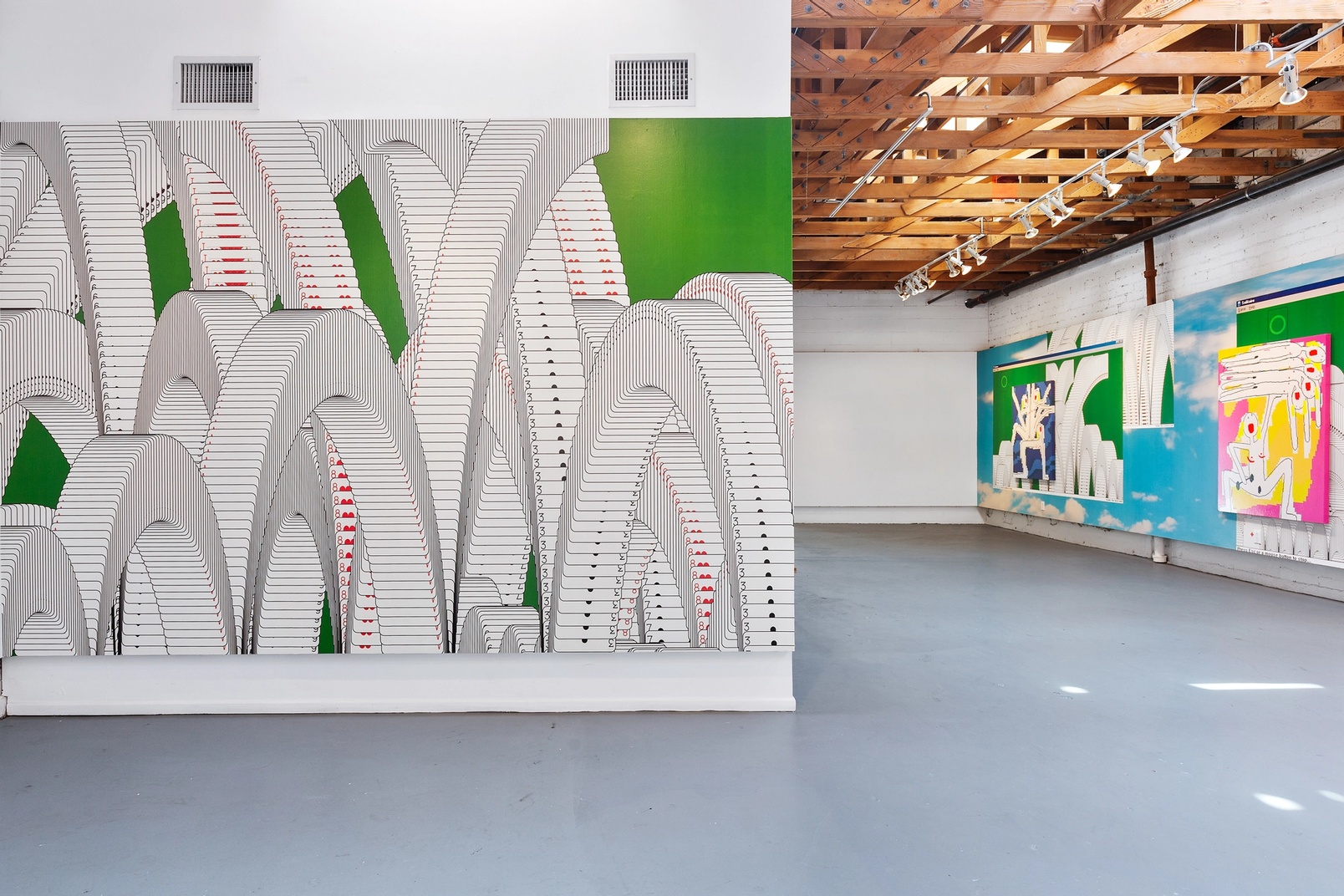 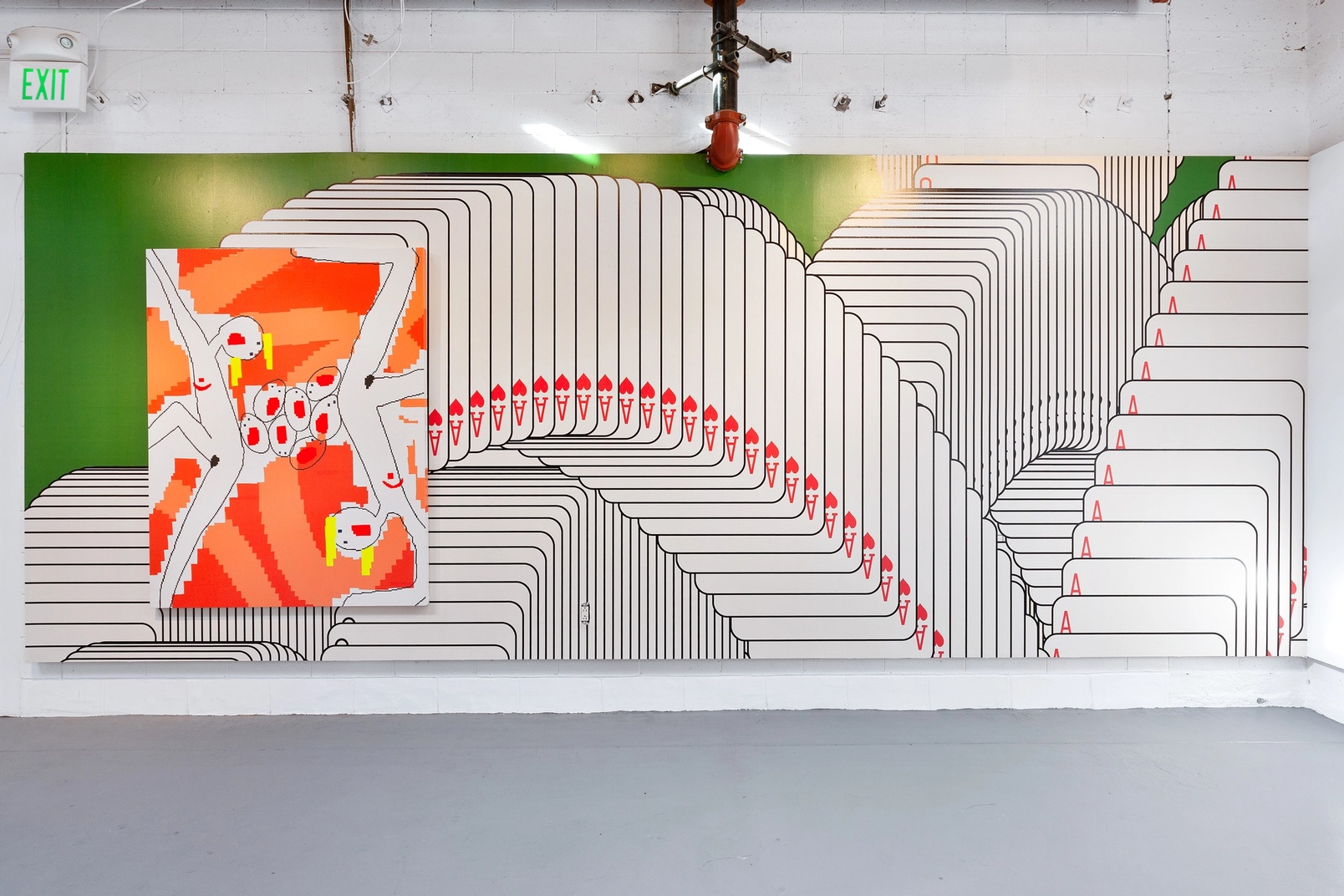 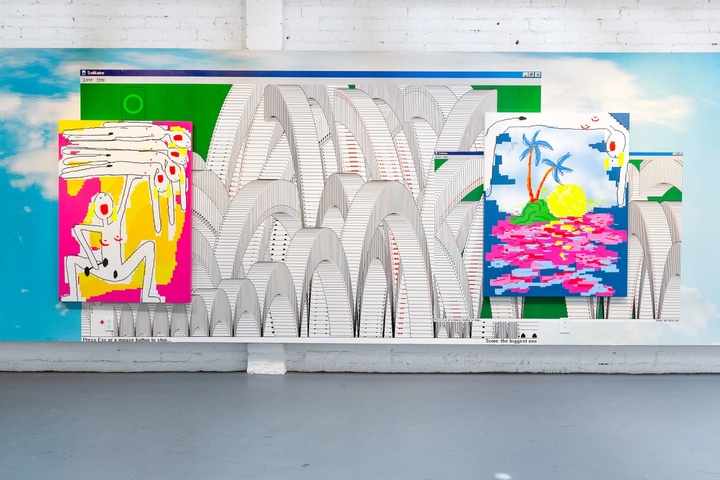 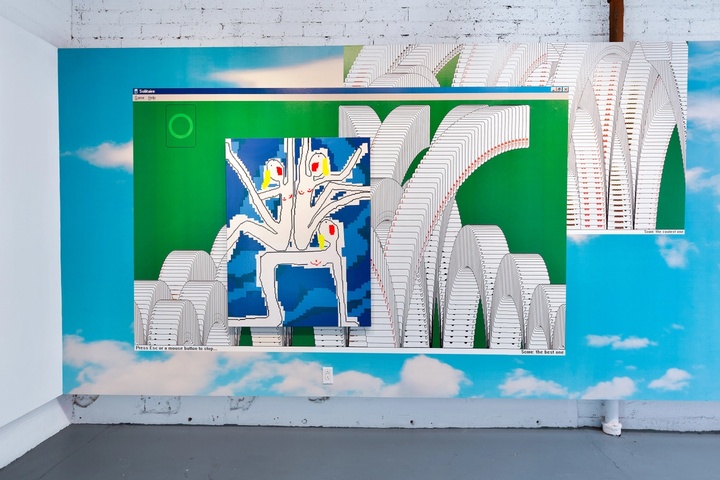 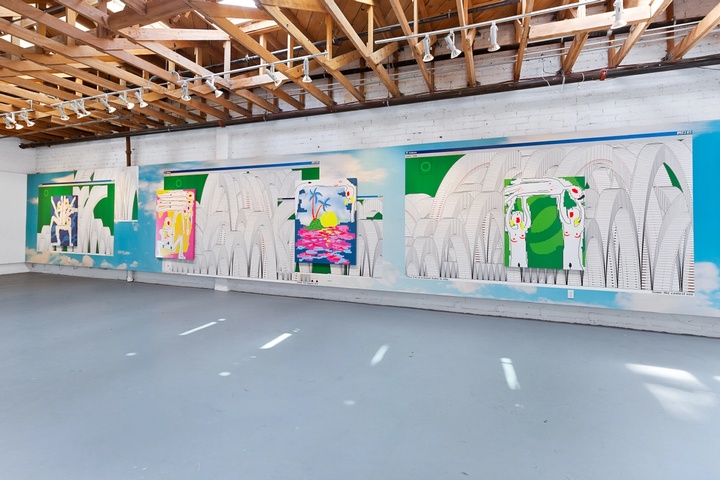 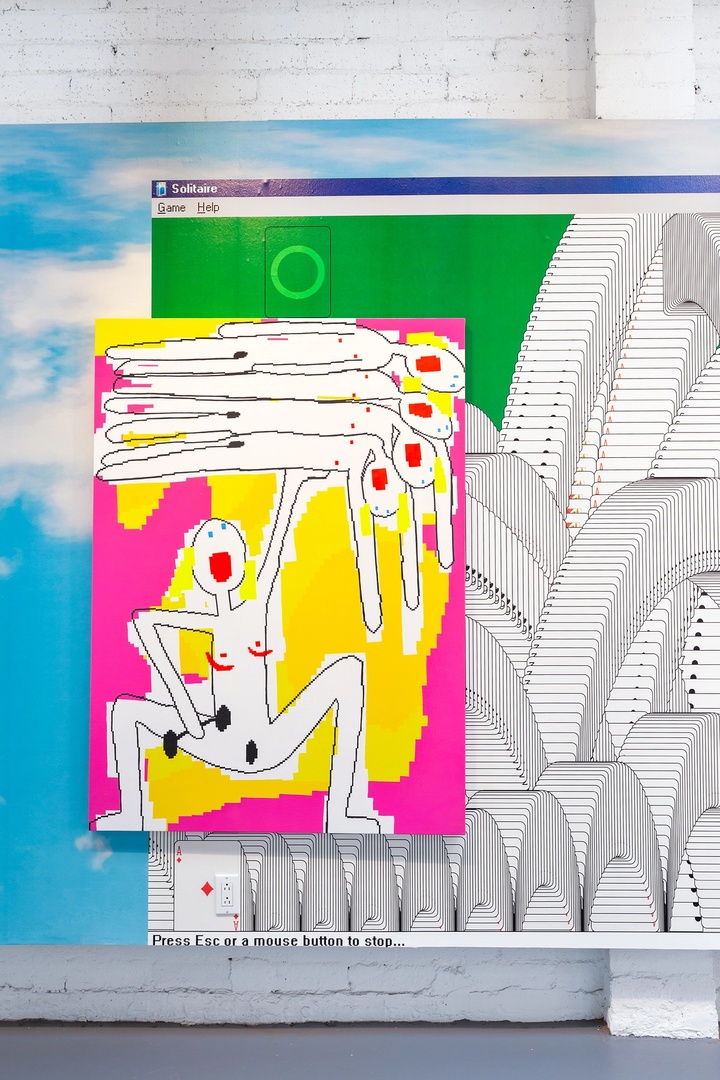 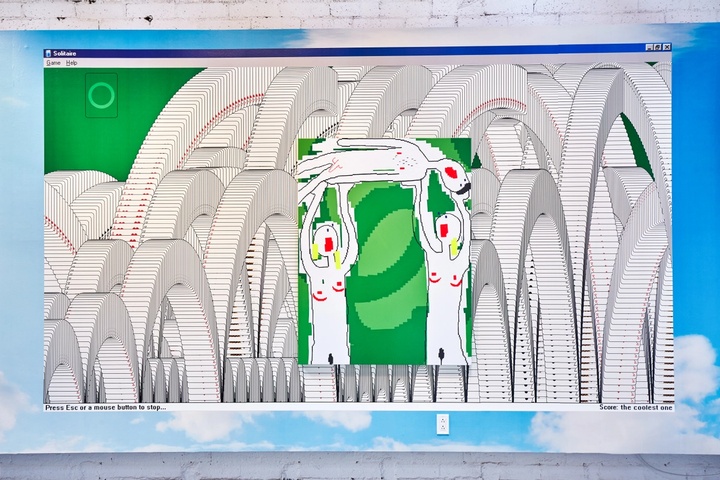 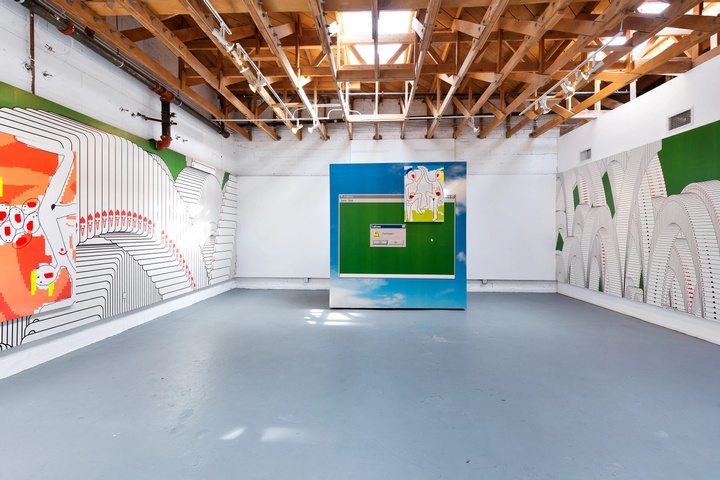 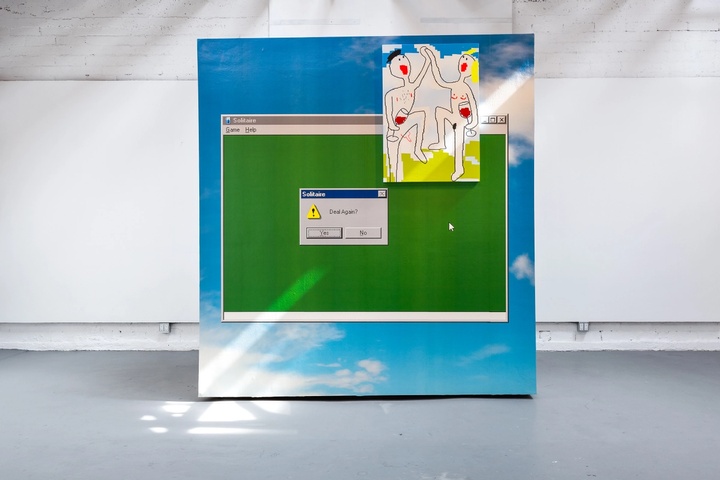 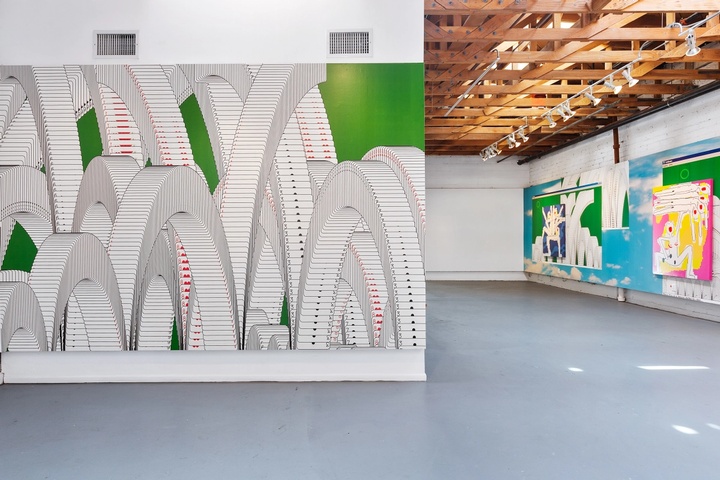 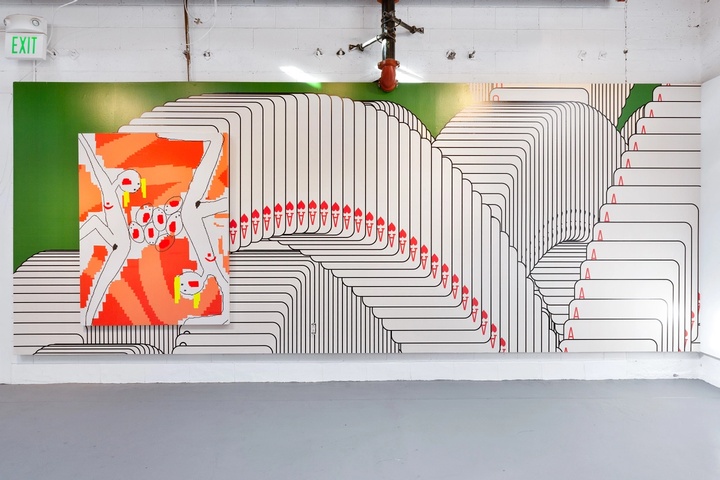 As a token representative of Millennials or Generation Y, Serbian artist Maja Djordjević glorifies the connection of her age group with computer technology, through unique work that is strongly informed by the aesthetics of Sega, Space Invaders, arcade games, and particularly Microsoft Paint software. The days and nights spent experimenting with once breakthrough features of this simple raster graphics editor created a strong connection with the crude, highly pixelated imagery. But underneath the surface, this limiting aesthetic became merely a channel that links to the emotional state of a teenager exploring life and the social norms by drawing naughty pictures that could be erased with one click.

Instead of trying to flawlessly recreate the sharpness and precision of digital display with modern materials or technology, Djordjević is using traditional tools such as brush and thick layers of vinyl paint to render her flamboyant and gleeful images. Successfully employing its vibrancy and plastic feel to convey the artificially dazzling appearance of her inspiration source, her paintings, sculptures, and installations exist solitary in the void space between the digital and analog. Speaking of her own life experiences and interests, the works are dominated by an unrefined female character who is getting engaged in common life events as well as in utterly surreal scenarios. Typically nude and with puzzling excited/shocked expressions on her face, she is symbolizing both the artist herself and other people, as they’re going through a variety of life’s emotionally intense and exciting events.

As the first artist invited to Los Angeles for the Balkan Projects’ residency, Djordjević’s new body of work carries a significant connection between her home and the past, and the new surroundings. Painting from memory for the first time and without the use of Microsoft Paint software, the new images are instinctively escaping the restrictions of the computer interface, elevating the exuberant atmosphere to blissful new heights. Temporarily based not far from the gambling capital of the world, the presentation is built around another favorite childhood pastime – the Solitaire. Borrowing its “Deal Again” command for the title of the show, Belgrade-born artist is preparing an enthralling installation that will place new paintings inside the eclectic interface of this iconic computer game. Bringing back the excitement of cards being shuffled and dealt through an absurd digital fountain, the installation somewhat blends the magic and nonsense of Alice in Wonderland with the limiting yet alluring appearance of a familiar digital interface, while connecting the childhood innocence and curiosity with the emotive state and creative urge of an artist’s adult life.