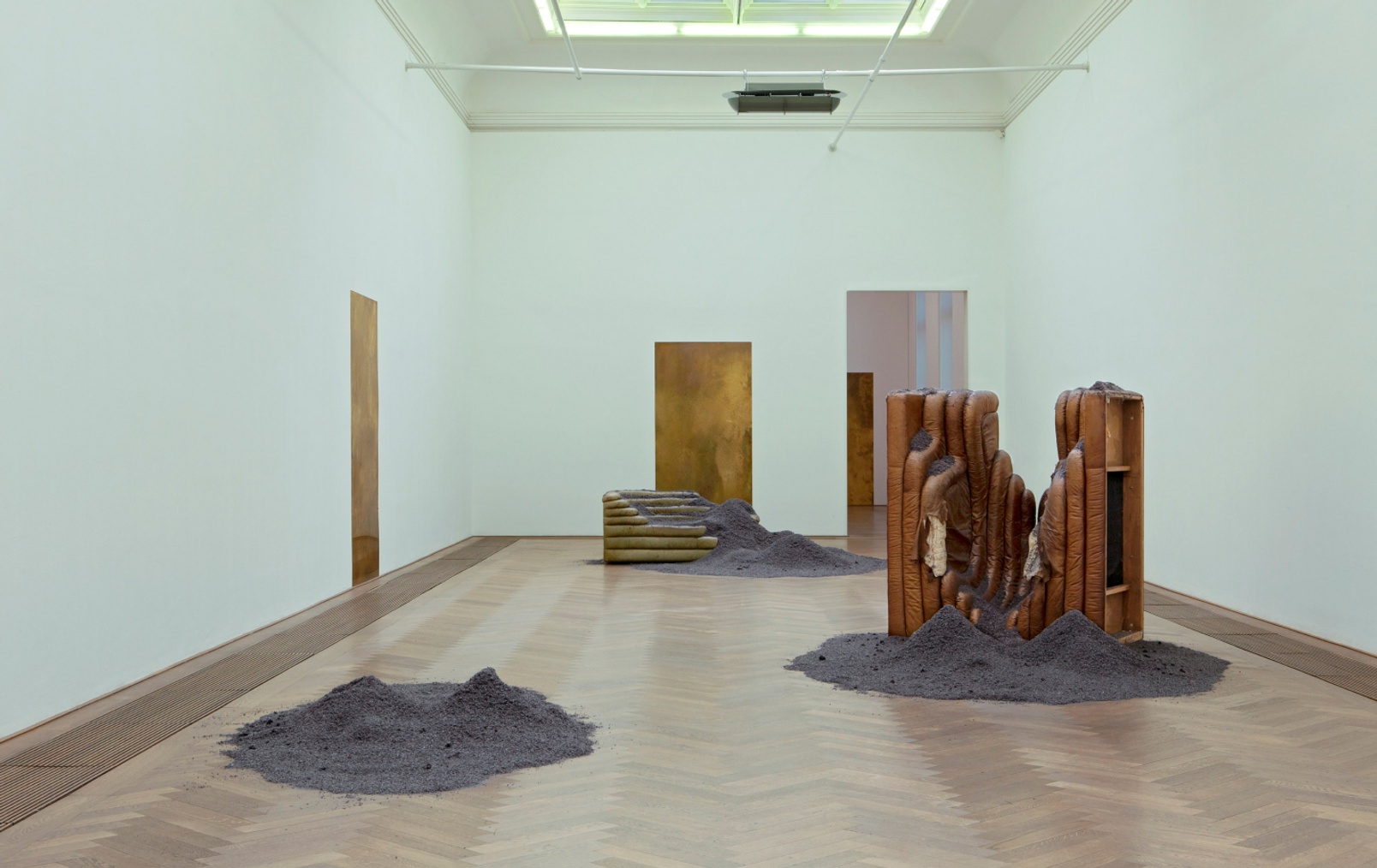 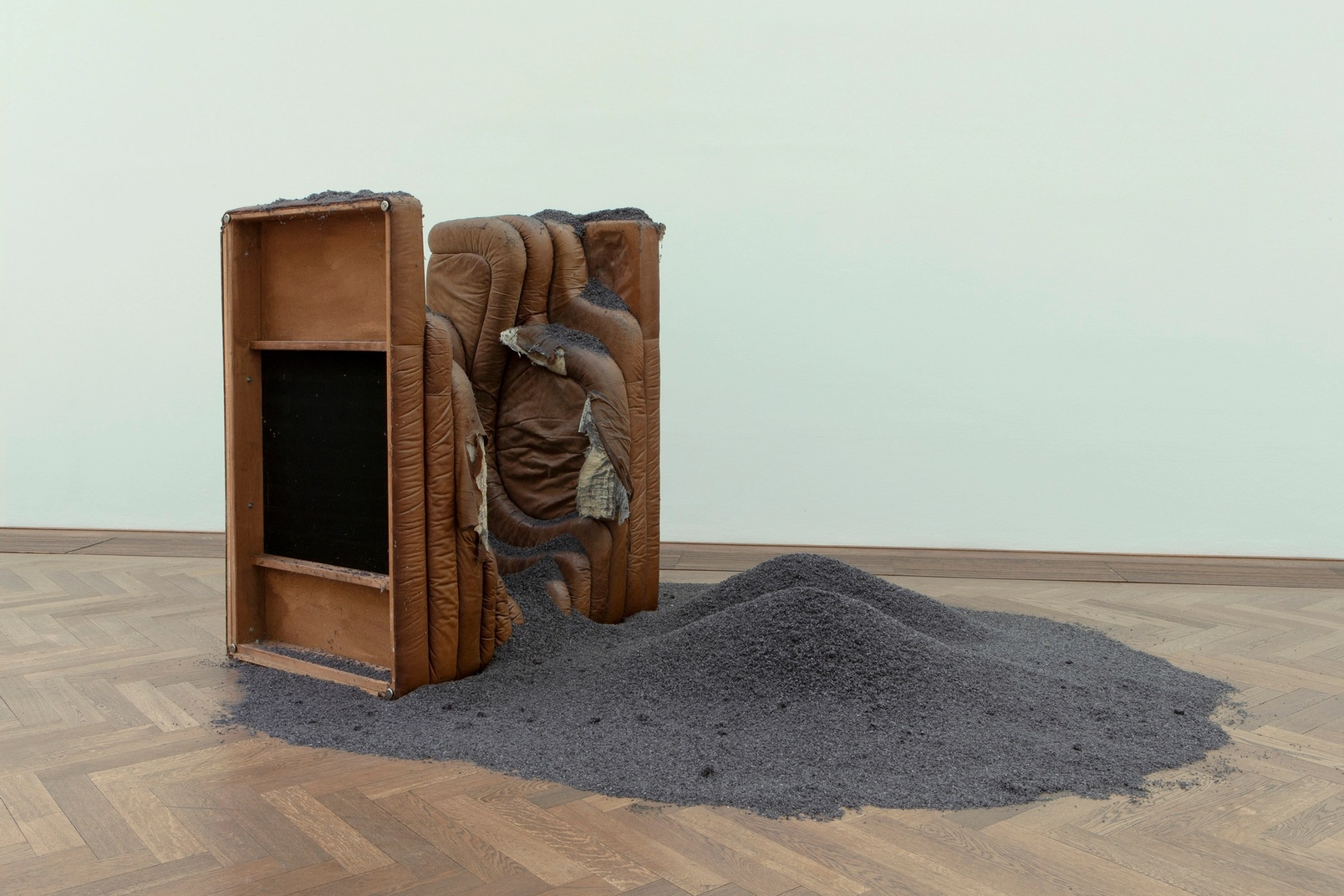 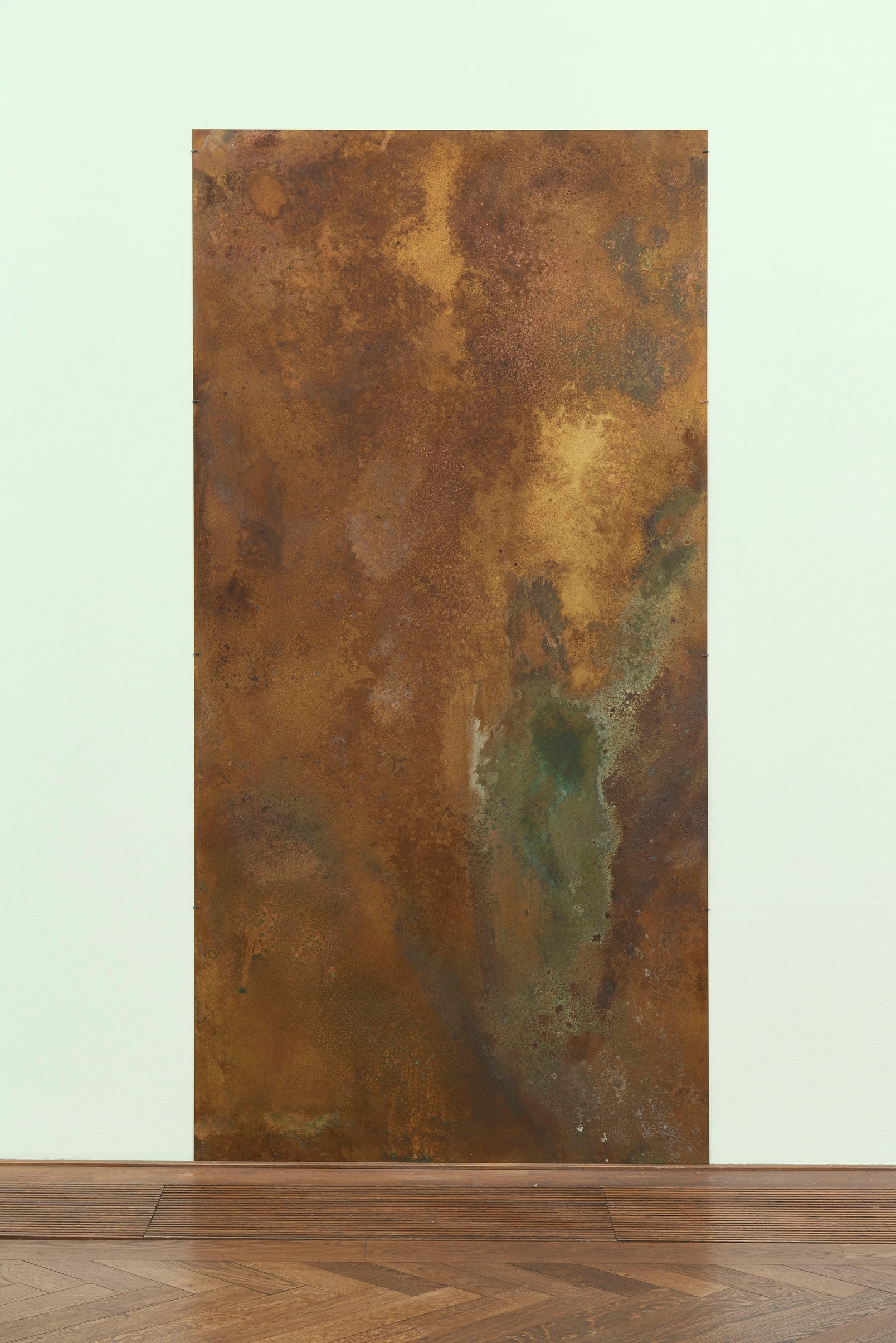 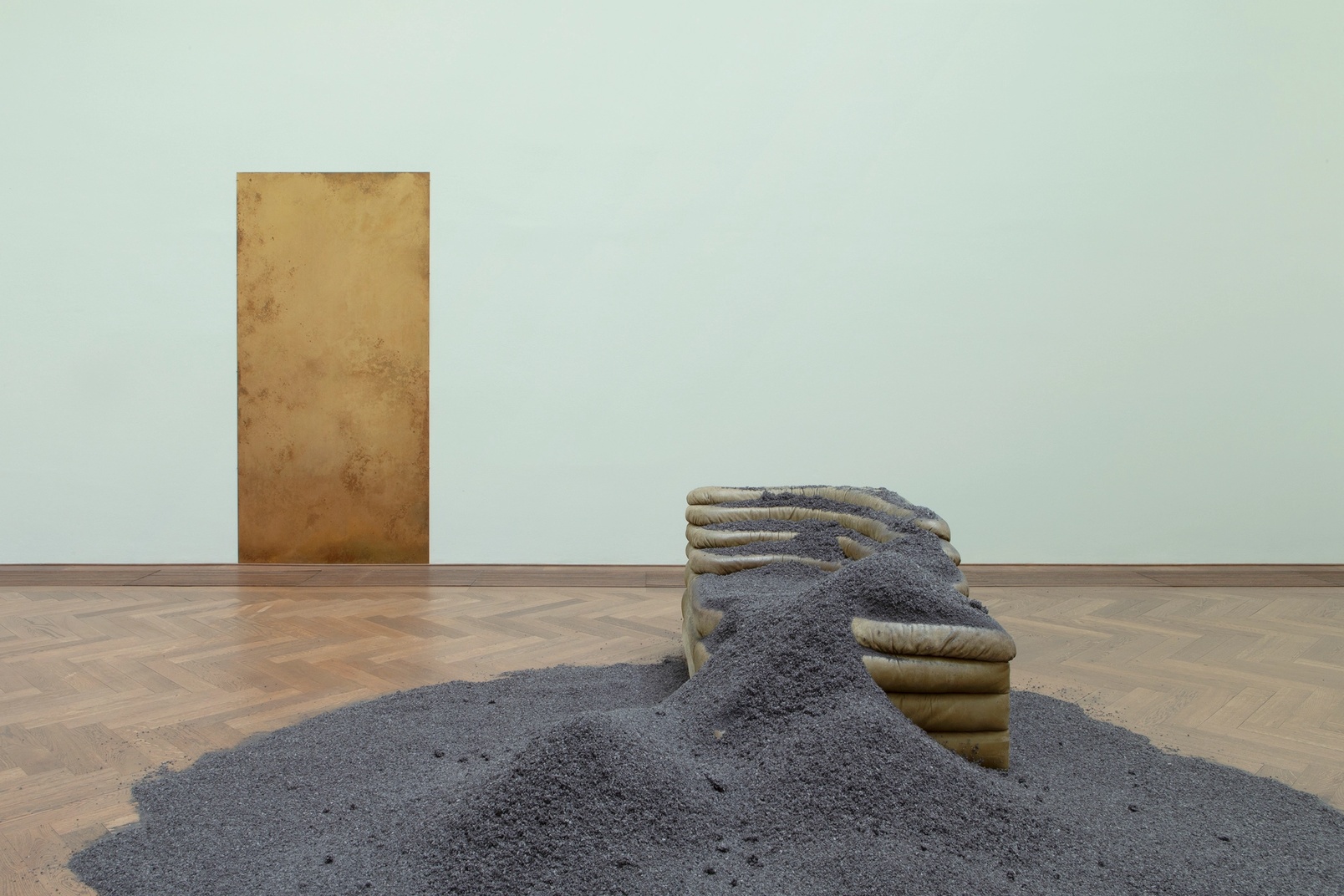 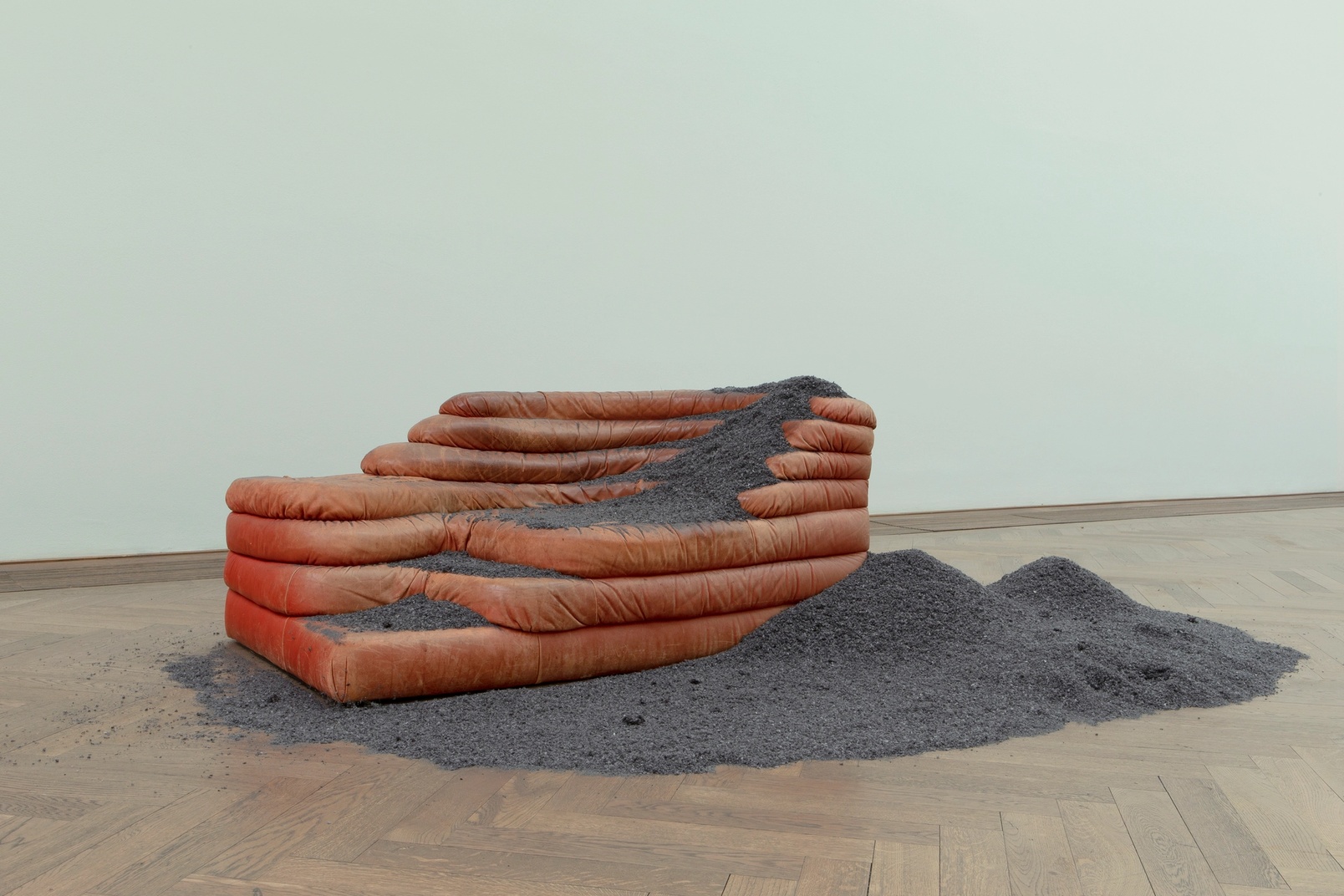 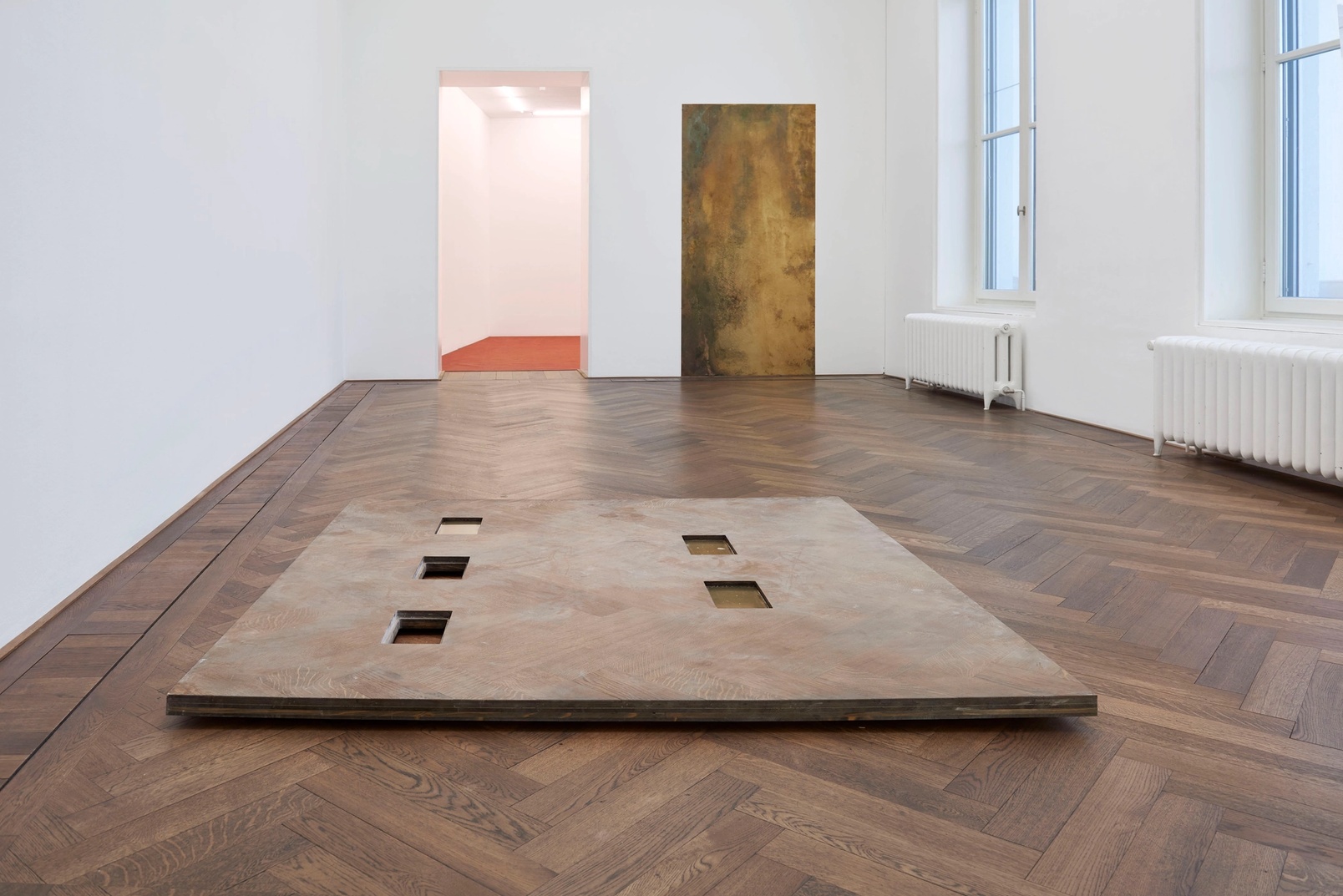 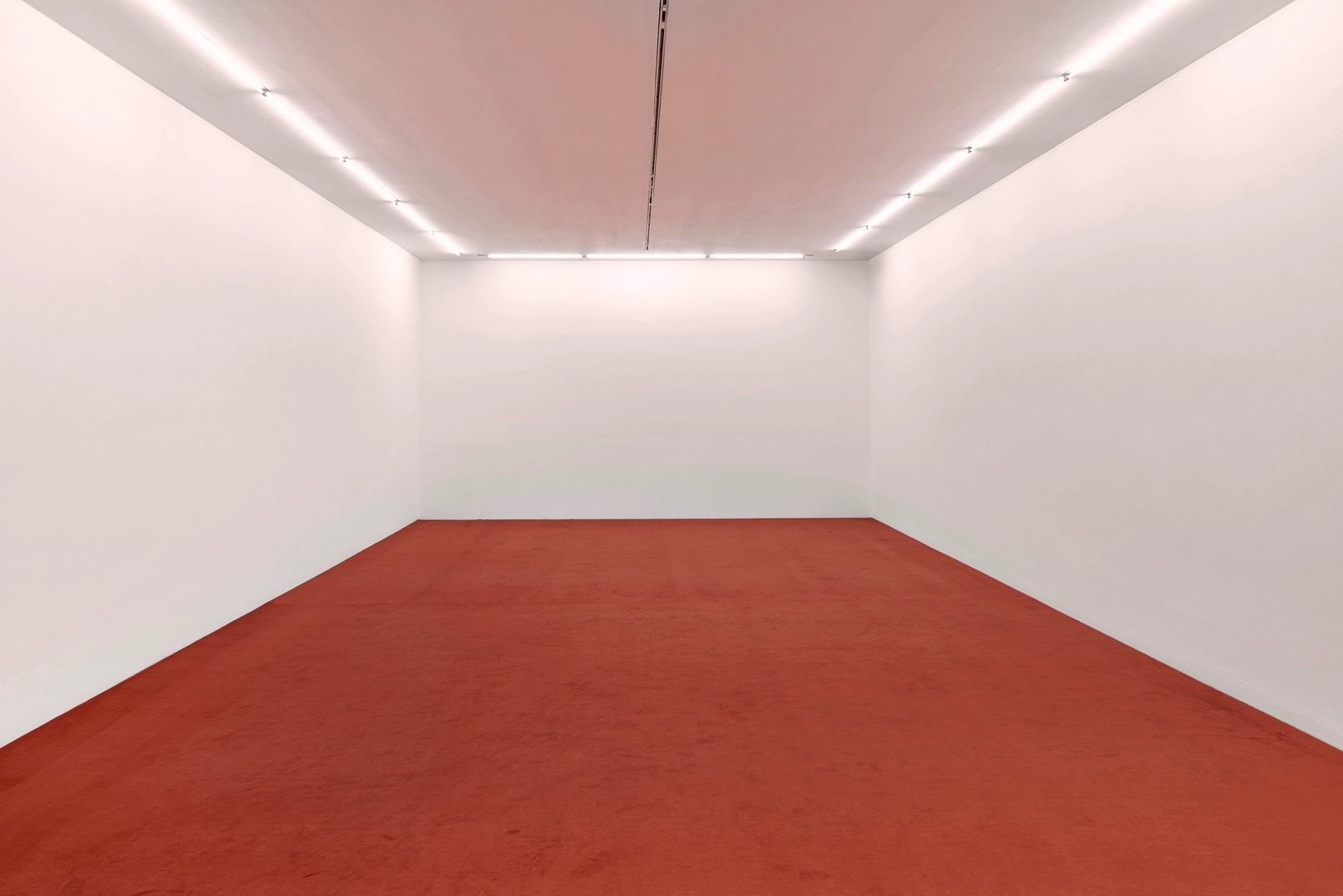 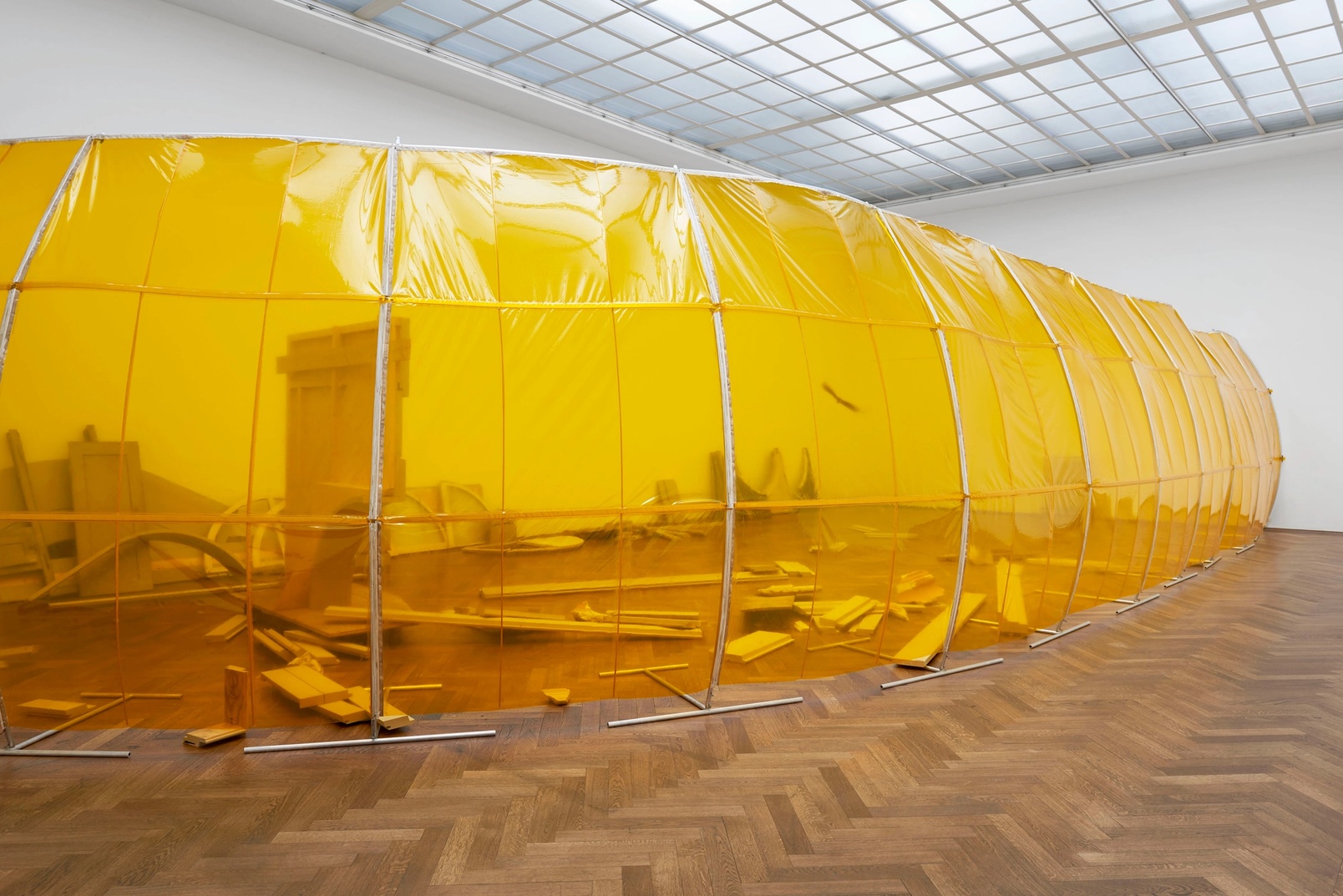 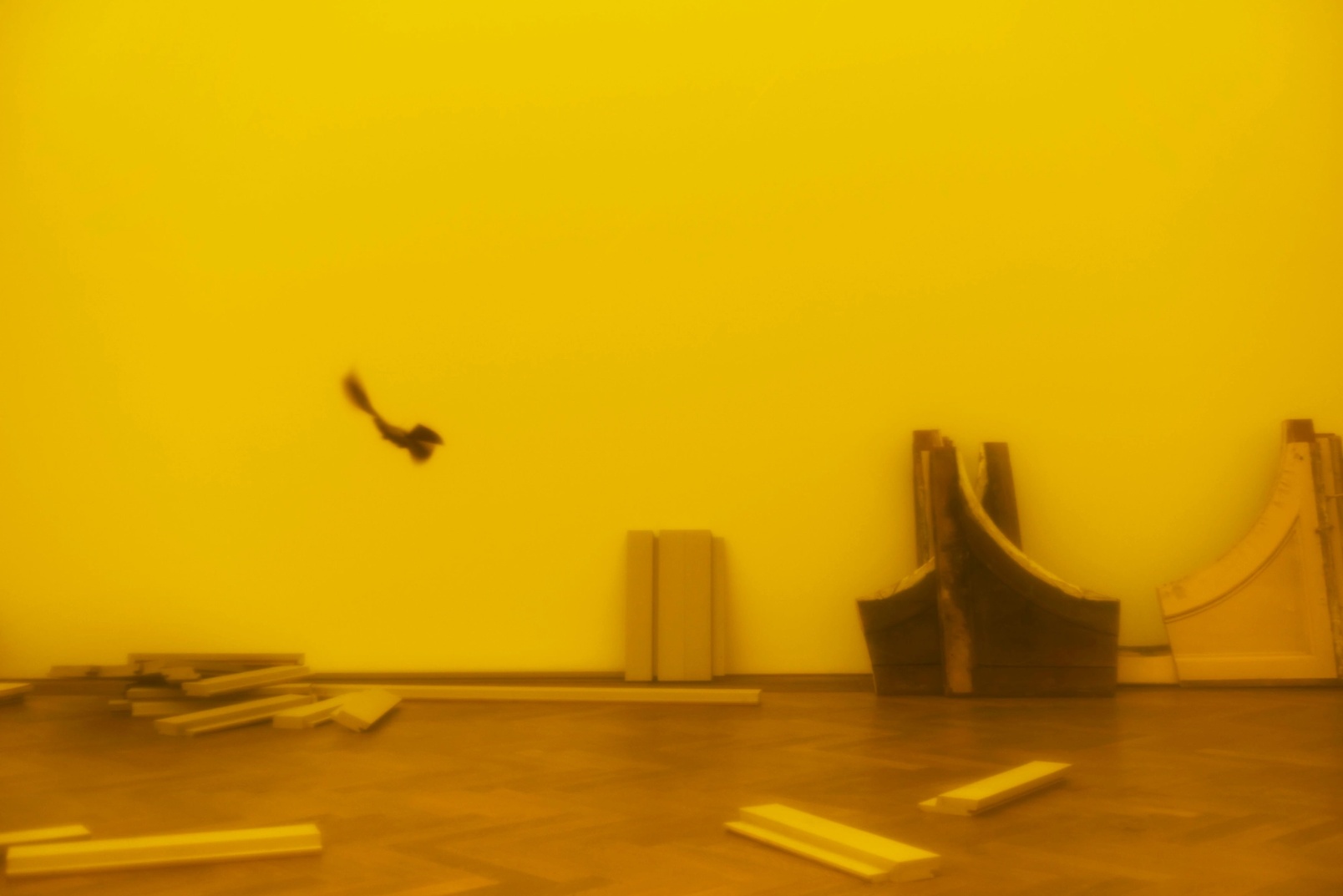 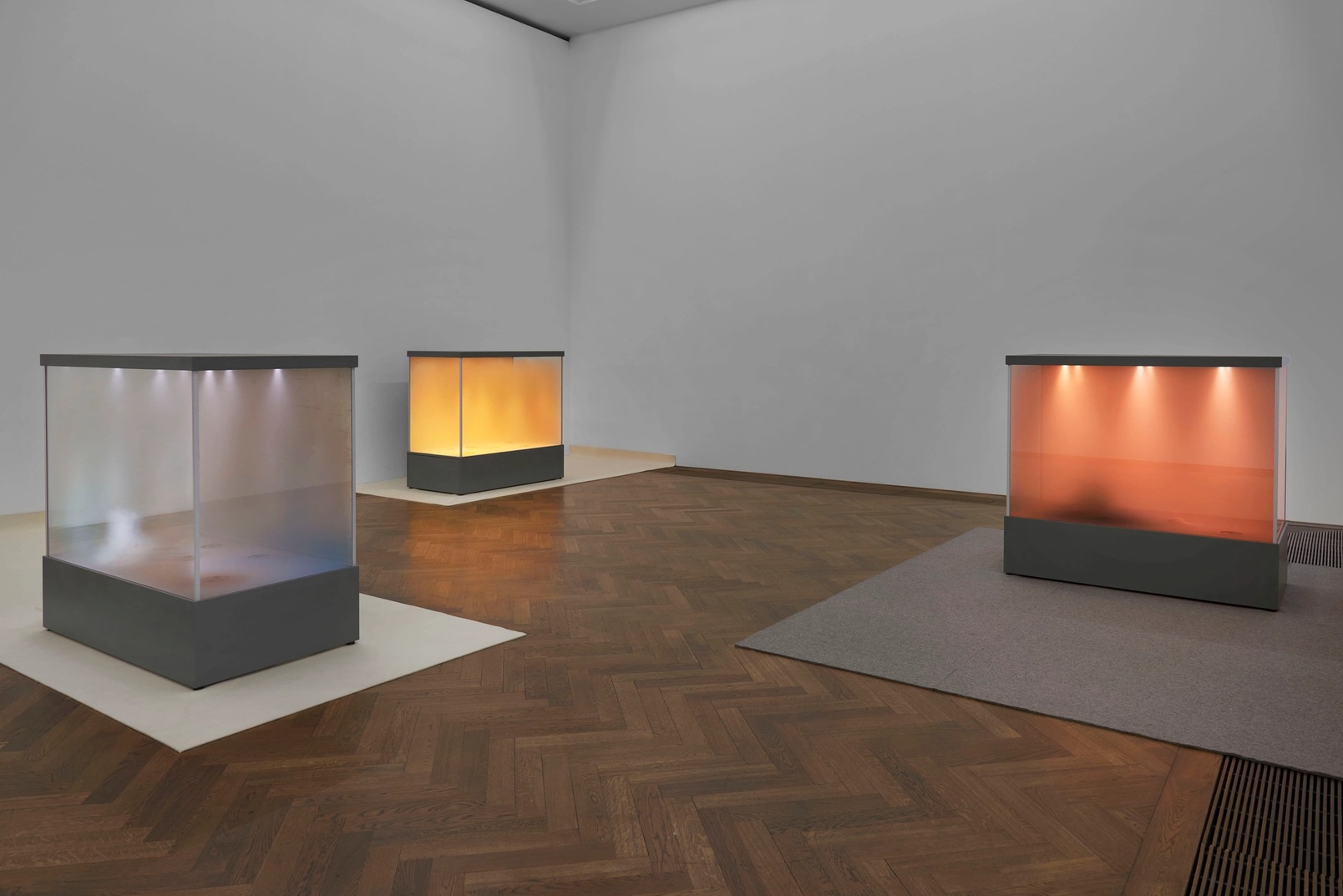 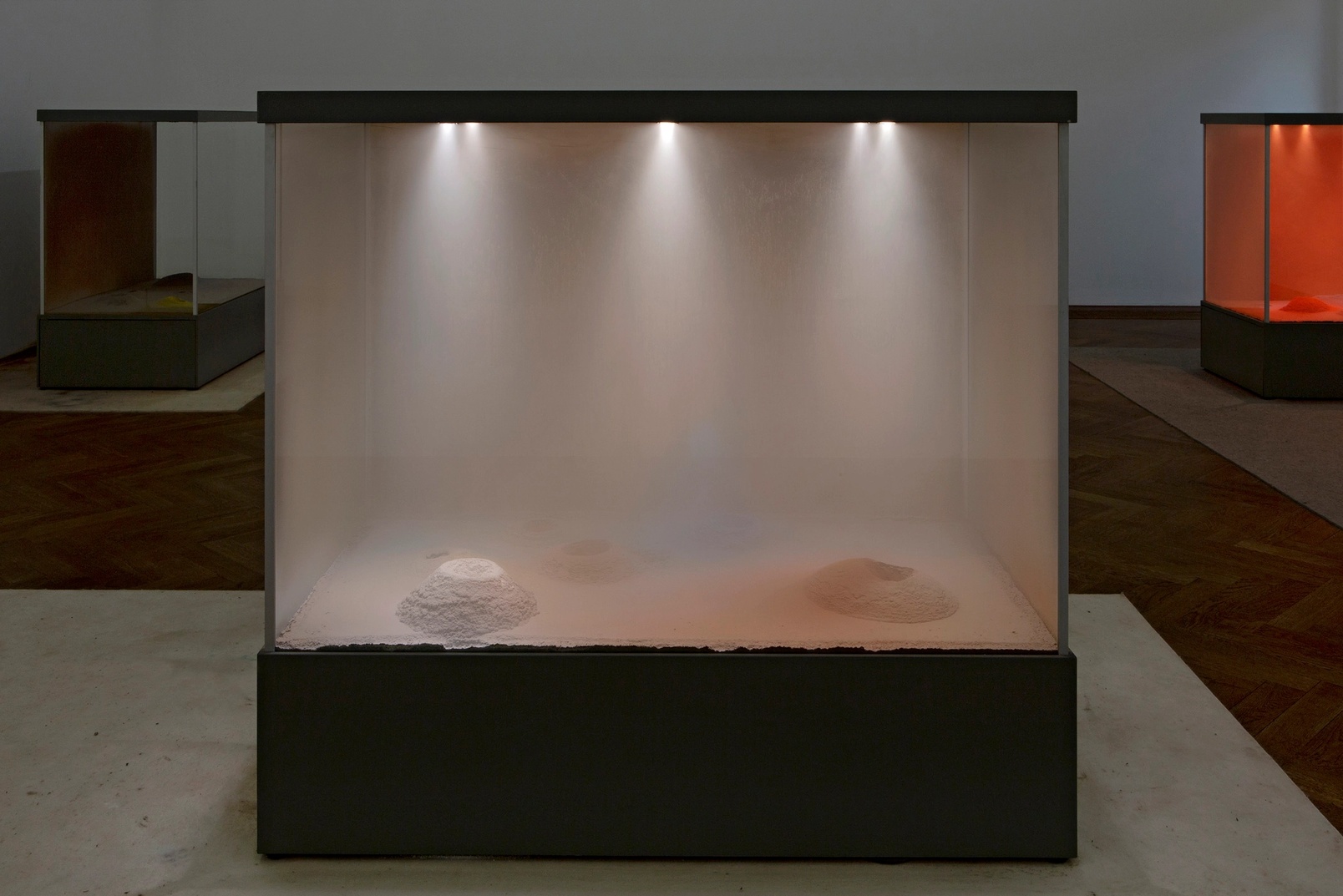 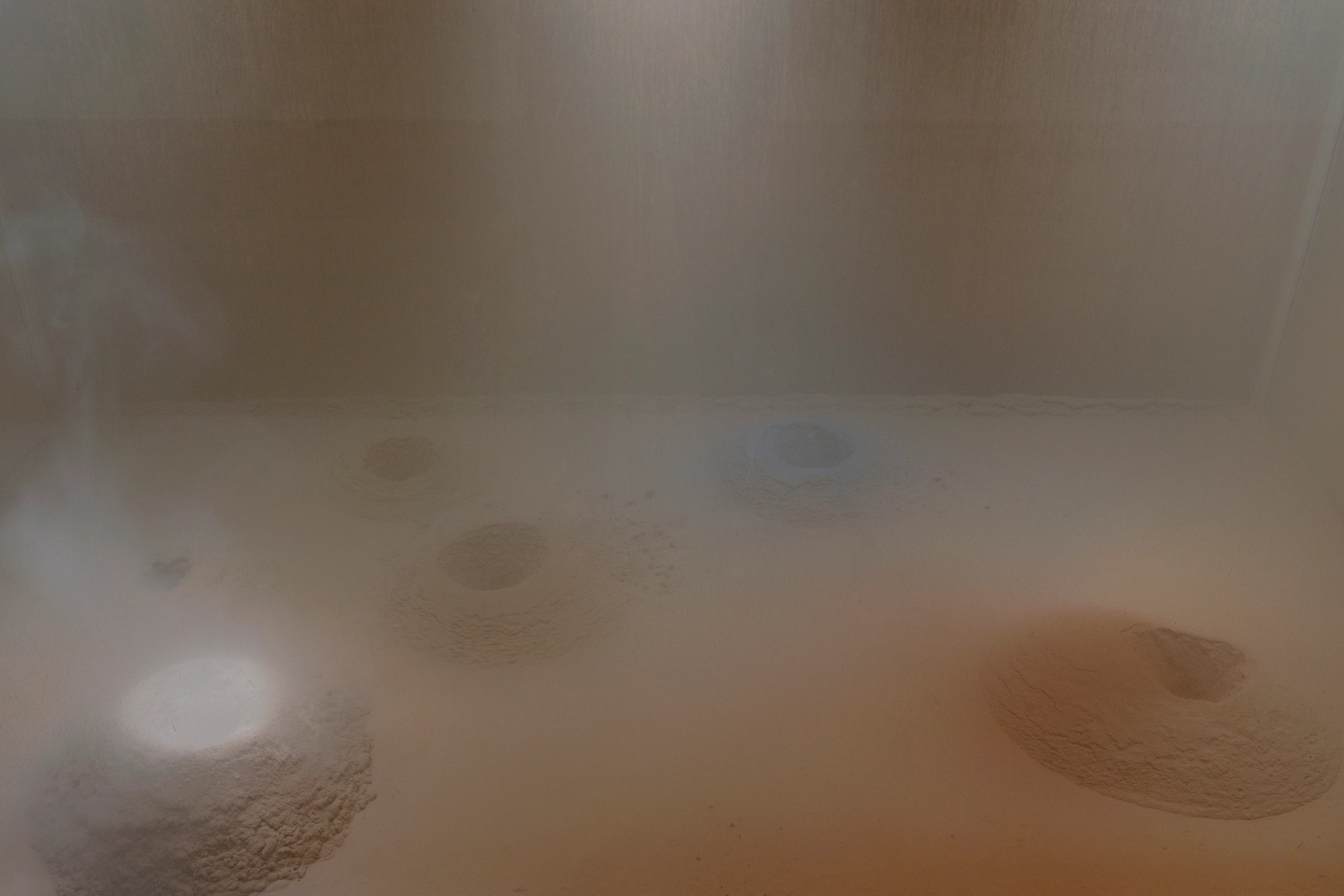 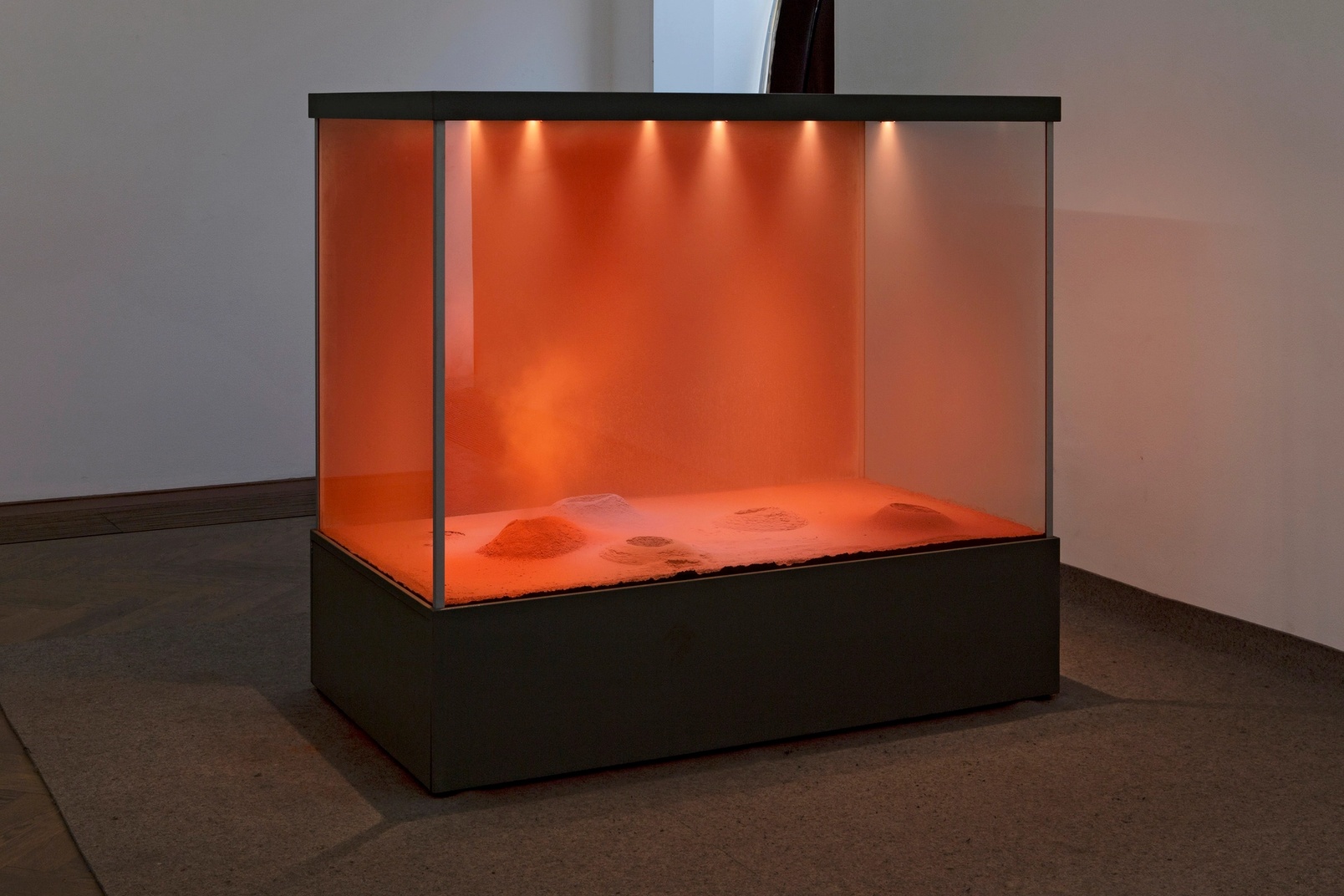 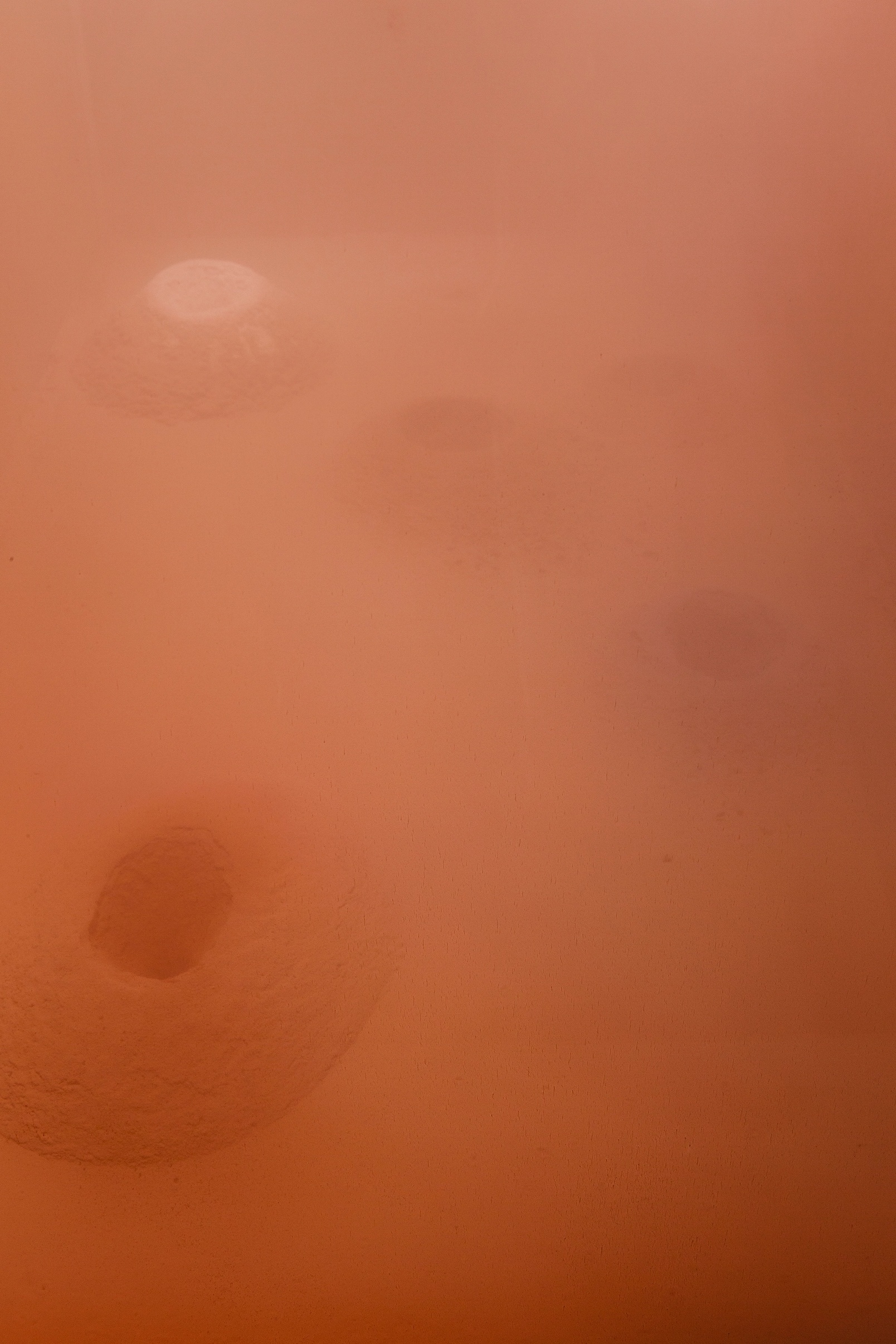 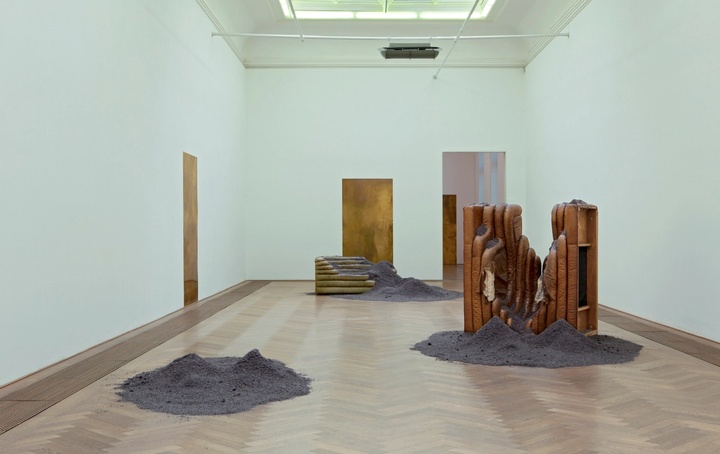 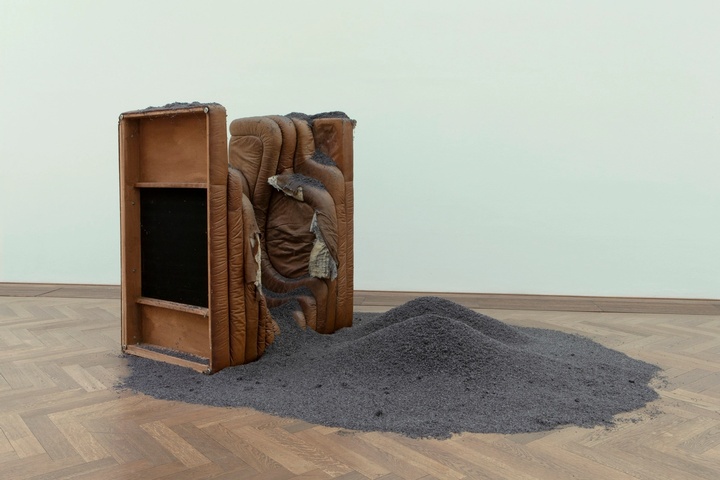 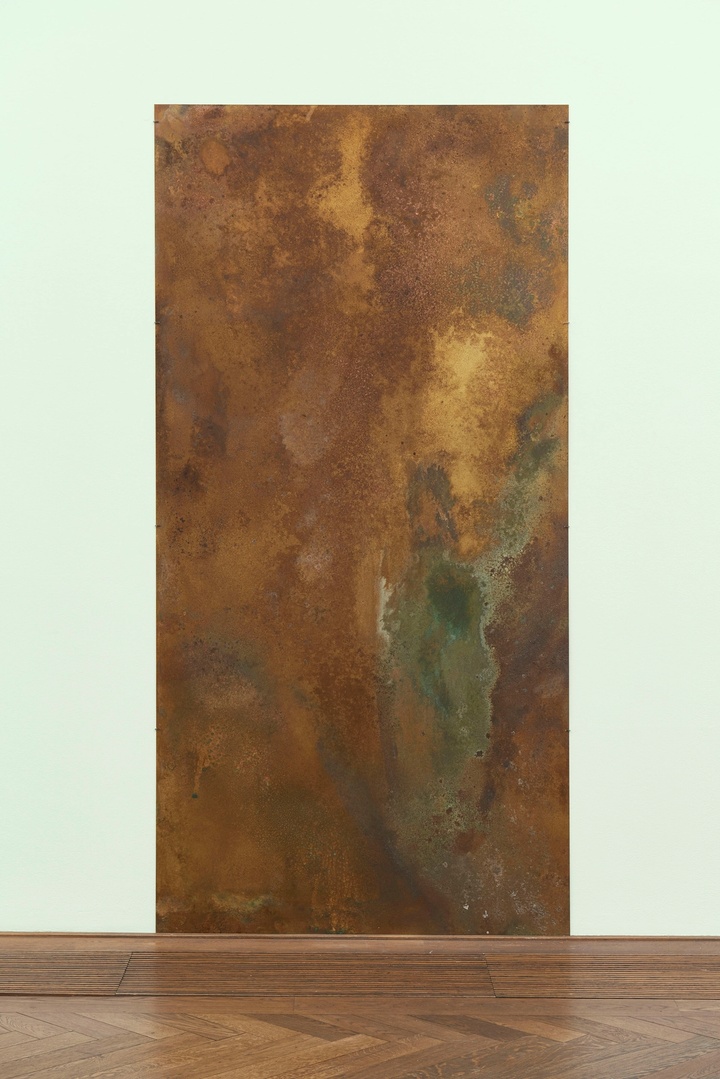 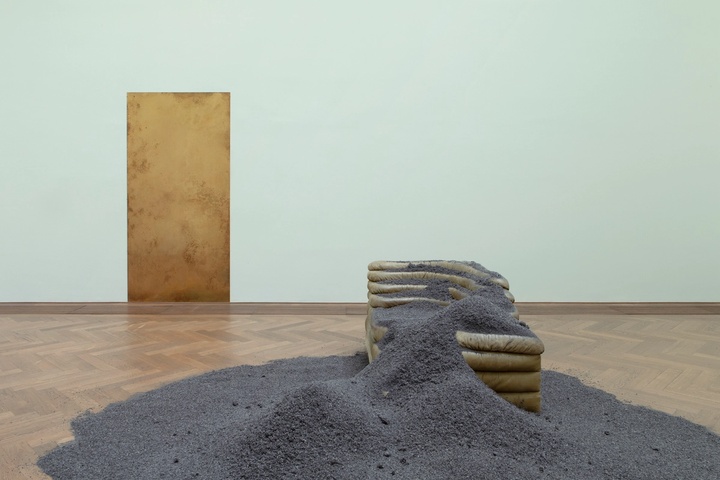 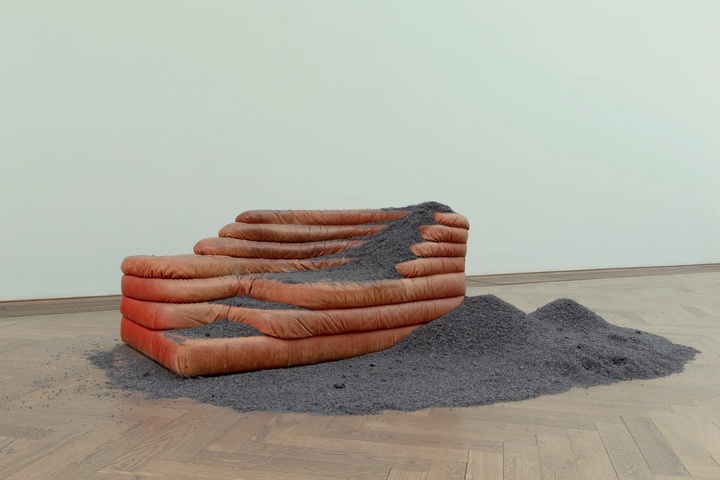 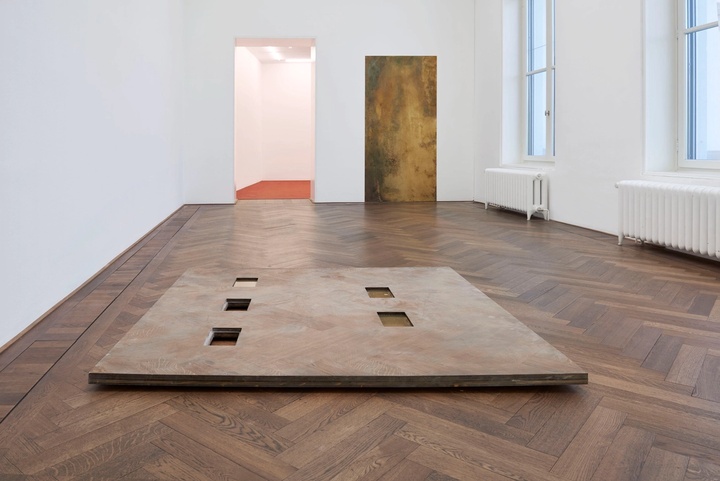 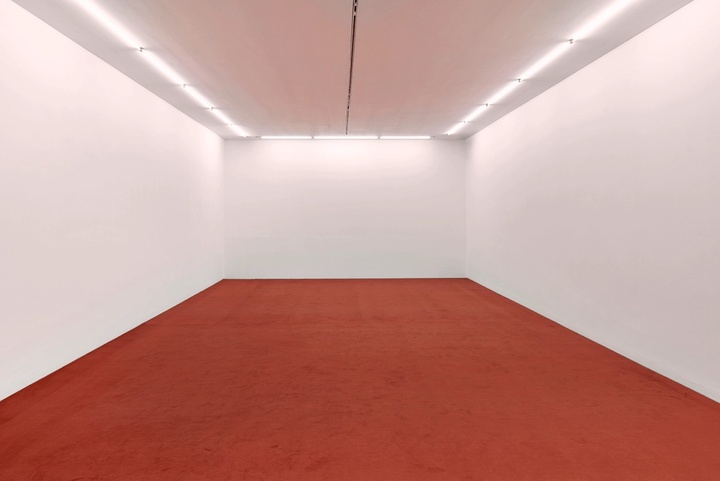 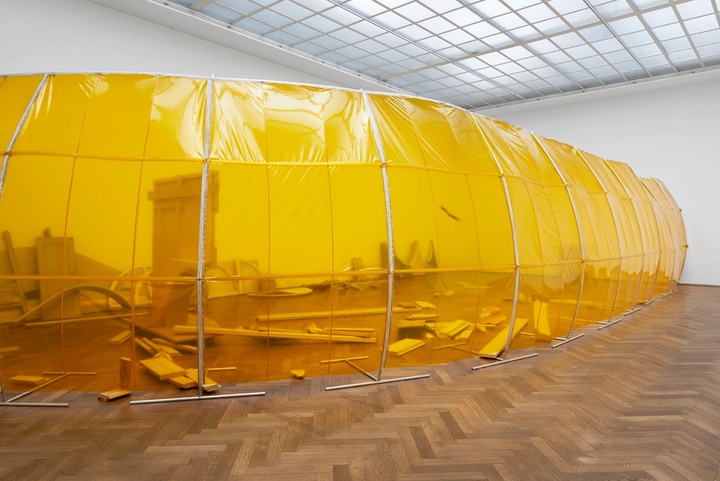 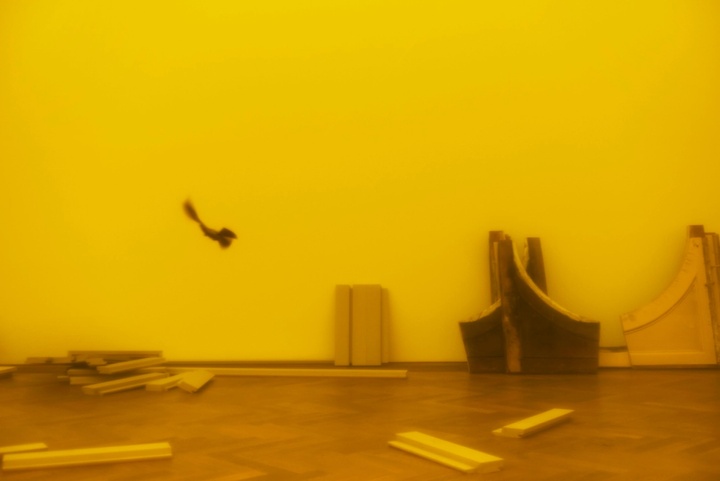 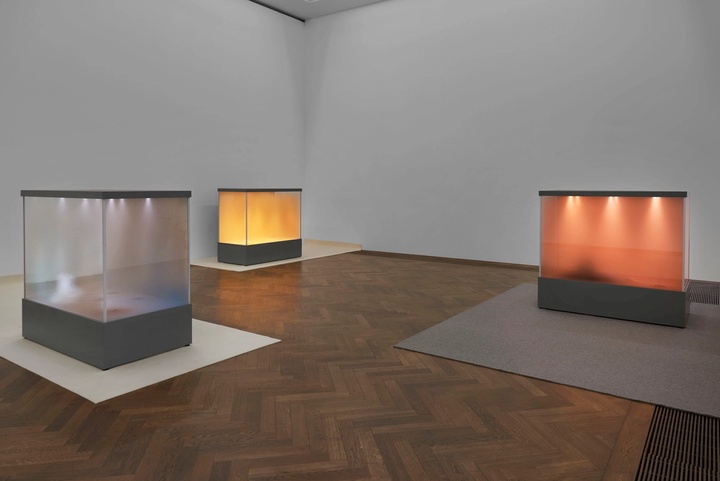 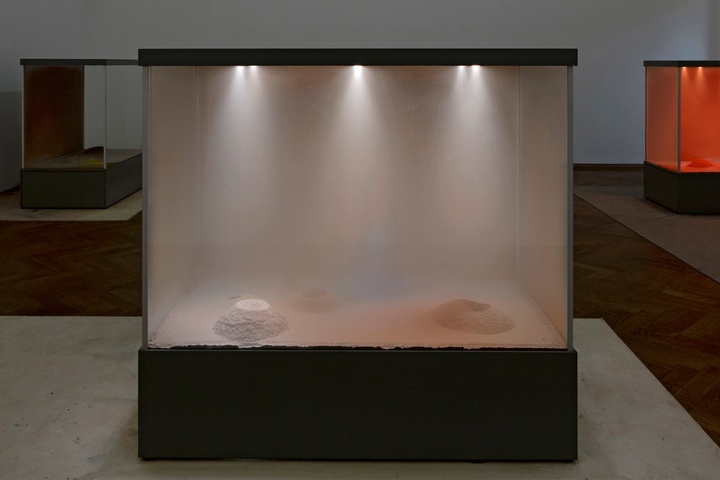 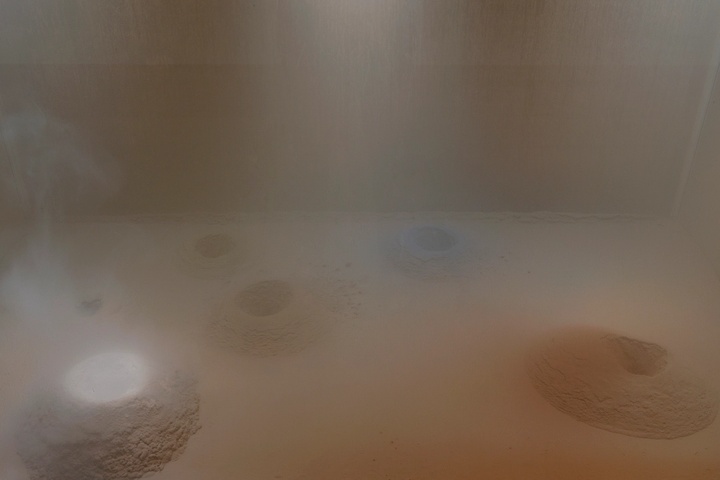 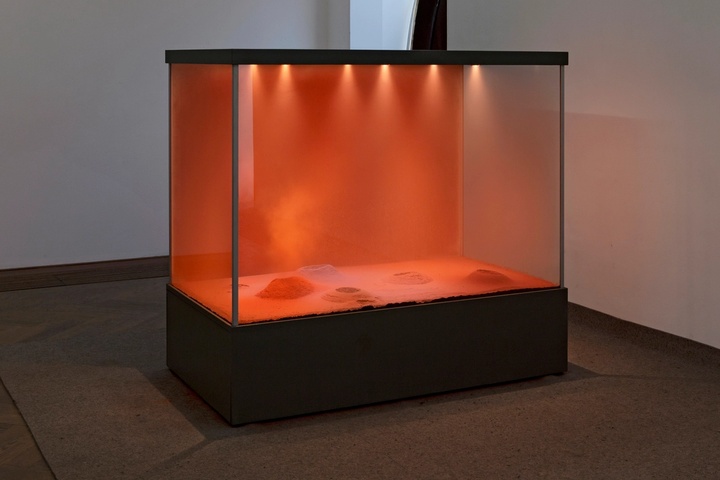 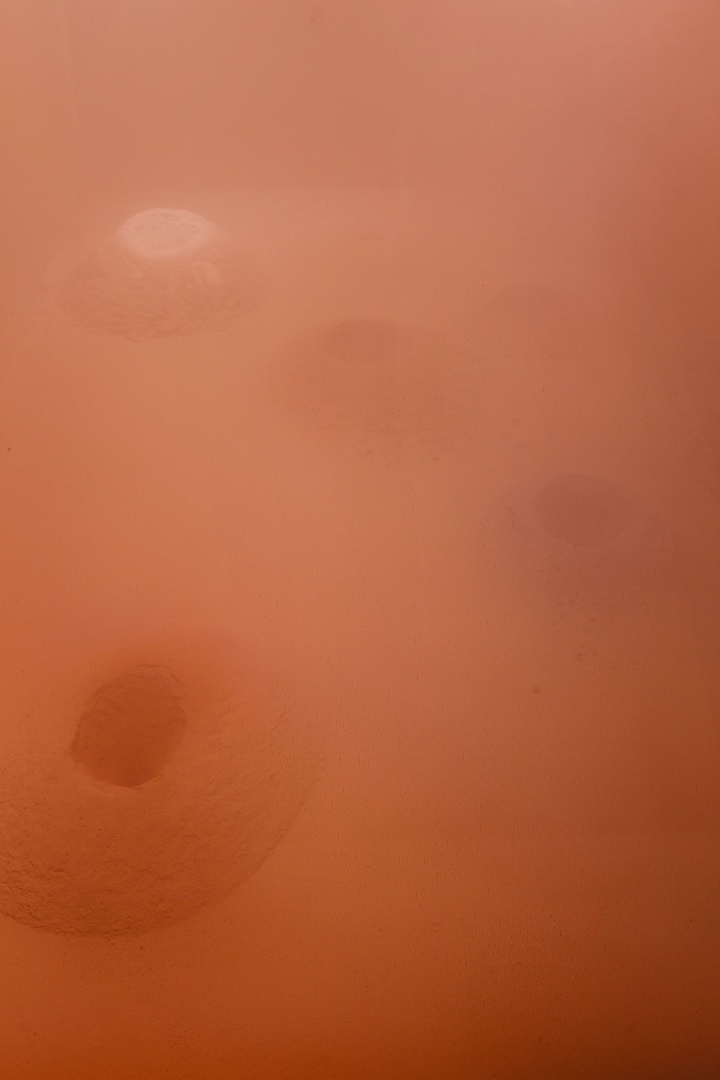 Can an exhibition – typically an assembly of discrete, immutable things on public display – function like a reactive organism? Can it, in that sense, be alive? And can it, in order to be so, be fed by a confluence of historical and real-time events that propel it through an ever-changing choreography of transformation? These are the preoccupations underlying I am Gong, Dora Budor’s experimental exhibition and first institutional solo show in Europe.

Taking cues from cinema, science fiction, and architectural history in equal measure, the Croatian-born, New York-based artist often constructs her artworks as interdependent systems. Budor’s new exhibition, however, links these systems to Kunsthalle Basel’s specific historic and cultural context, from its origins to the present, in a quest to relinquish control over nearly every artwork in the show by submitting it to unpredictable external forces.

Basel’s Musiksaal, a legendary concert hall located across the street from Kunsthalle’s main building, is the show’s literal motor – or lifeblood, if you will. Designed by Johann Jakob Stehlin-Burckhardt and completed in 1876 (four years after its neighbor, Kunsthalle Basel, which he also designed), the concert hall was intended as a “sibling,” an acoustic counterpart, to a Kunsthalle dedicated to the visual arts. The Musiksaal’s current, almost archaeological reconstruction governs the formal, atmospheric, and sonic conditions of Budor’s exhibition. Sound-sensitive devices placed inside the construction site collect signals – shrill noises of construction drills, metal beams being welded, wind whipping past the windows – and transmit their frequencies in real time to Kunsthalle Basel, if, when, and with whatever intensity they occur. This sensory transaction system carries its own title, Tuning (Well, It’s a Vertebrate...), and metastasizes in Budor’s artworks in various ways.

The exhibition opens with the installation The Year without a Summer (Klug’s Field), a seemingly desolate environment enveloped in a slightly greenish light. Worn leather sofas, some battered and torn, occupy the space, their modular, 1970s utopian designs serving as the landscape’s ground. Overhead, four machines each sporadically release flutters of cinematic special-effect ash according to furtive rules. Piles of faux cinders accumulate on the floor and sofas, as if in the aftermath of some unidentified cataclysm. In fact, the speed and quantity of the ash falls, and thus the sizes and shapes of the piles, each visibly manifest the noise level transmitted from a different area of the Musiksaal. The ensuing image-forms evolve over the duration of the exhibition.

Three large brass plates also occupy the space. Specially treated to display the patina and marks of age that would allow their being assigned to different historical moments, each is a representation of time’s passage. A fourth such plate, in the second room, joins an architectural mock-up of the planned parquet flooring for the Musiksaal. The herringbone pattern of the wood pieces, mirroring Kunsthalle Basel’s own parquet floor, has holes filled with a gelatinous substance. Future floor laid upon historic floor, projection laid upon actuality, material rigidity interrupted by viscous goo – incongruities cling to The Devil, Probably, which takes its title from Robert Bresson’s 1977 film about a post-1968 society in crisis.

Neither entirely in the present nor confined to the past, neither nostalgic nor futurist, the exhibition produces a sense of temporal unease. So, too, is a kind of estrangement made palpable through a specially created soundscape that travels through the cavities of the building. It trembles and resonates from the walls and floors, concentrating in the exhibition’s third room. The composition is, again, modulated by activity at the nearby construction site. A darkly affecting, ever-mutating sound results, whose impetus was J. G. Ballard’s 1960 short story “The Sound-Sweep,” which likewise lends Budor’s piece its title. Ballard’s narrative describes a world where technological developments have rendered audible music obsolete, but sounds have been deposited in solid surfaces, causing emotional flashbacks among inhabitants when these sonic sediments trickle out. History, both Ballard and Budor insist, is never entirely past, but instead lodged in the very fabric of our surroundings and seeping into the present.

The fourth room features a trilogy of sculptures, like hybrids between natural history vitrines, laboratory incubators, and industrial test chambers. Each intermittently spurts dust and pigments whose movement and hues evoke the atmospheres of J. M. W. Turner’s historical paintings (nearly contemporaneous with the construction of Kunsthalle Basel and the Musiksaal), which are said to portray visible changes in the Earth’s atmosphere due to industrial pollution and volcanic dust. Frequencies from the Musiksaal here too act as a live score generating the unstable image-forms inside each chamber, activating airflows and particulates to craft a psychogeography of dirt and waste expressive of the era spanning the Industrial Revolution to the present day.

In the final room, a lone robot bird endlessly flies above a pile of wreckage, visible through the yellow-orange cast of its enclosure. Its flight pattern is directed by a translation of Beethoven’s Symphony No. 9 (the first music piece ever performed by an orchestra in the Musiksaal, on October 4, 1876) into a movement vector. Below, historic architectural elements from the Musiksaal’s construction site are joined by contemporary mock-ups of the building’s facade, fashioning a ruinous landscape. Titled The Preserving Machine, Budor’s installation borrows its name from Philip K. Dick’s 1953 science-fiction short story, which describes an attempt to conserve classical music in the face of cultural collapse by encoding musical scores into animals. But beastly evolution mutates the scores to the point of unrecognizability: nature and culture compete in a fight for the survival of the fittest. The artist, for her part, erects her own mechanism for viewing and preservation, inscribing music in biomimetic movement patterns and allowing us to find future monuments amid rubble.

Although references to dark visions portending the perils of technology and of the future of culture and society infuse I am Gong, Budor’s approach is not patently or unequivocally apocalyptic. She stitches together history and the now, the visual and the auditory, one building and another, order and disorder, to create environments that make uncertainty visceral. To accomplish this, Budor has constructed what amounts to a variable-driven exhibition system that effectively deregulates the fixity of the artwork and its presentation context. Rerouting the most basic functions of the solo show that normally make it a site of artistic agency and display, she transforms it into an assembly of constantly evolving contingencies. The result exudes a kind of disobedience. Such productive unruliness may be entirely apt, the artist seems to say, for a moment like our own.

The exhibition was made possible through the generous support of the Balkan Projects, the Luma Foundation, Andrea Grisard & Alex Grossenbacher, and the Outset Contemporary Art Fund; additional support was granted by the Ministry of Culture of the Republic of Croatia.